BUY GOLD prices edged back from a 1.0% rise for the week so far on Wednesday in London, taking Dollar prices down $3 from a new 5-month peak of $1251 as traders awaited the US Federal Reserve’s final policy statement of 2018, widely expected to bring the fourth hike of the year to short-term interest rates.
Major government bond prices rose, edging long-term interest rates down, as Western stock markets shrugged off another drop in Asian equities to add around 1% for the day, trimming 2018’s loss to date beneath 15%.
Japan’s Topix index has also now lost over 14% since last New Year, and China’s CSI 300 index has lost 23%.
“If like me, you believe the post-2009 bull market in equities has hit a wall, then why wait to buy gold?” asks newsletter writer, crypto-currency analyst and ex-HSBC fund manager Charlie Morris, turning bullish on the gold market for the first time since 2012.
“For gold to beat equities has become an undemanding task…Gold’s job is to be a reliable store of value, and sometimes, zero is the best deal in town.”
With only 3 hours until the Fed’s key December decision and 2019 forecasts on Wednesday, the yield offered by 10-year US Treasury bonds slipped to 2.82%, down dramatically from November’s new 7-year high of 3.24% and back to a level first seen in February.
That was before any of the Fed’s three hikes to short-term rates so far in 2018. 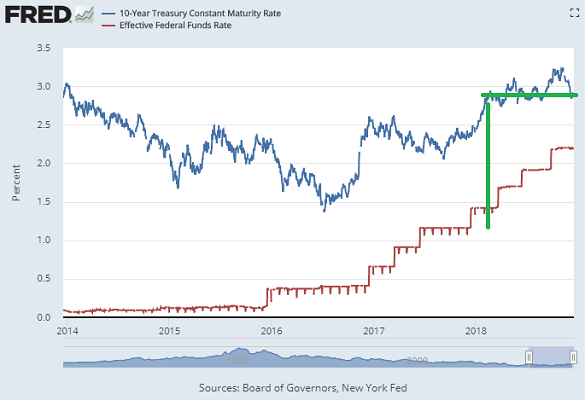 “The [gold] market has priced in the fourth hike but what remains important is the foreguidance for 2019,” reckons commodities analyst Benjamin Lu at Phillip Futures in Singapore.
“Volatility seen in equity makes could be a reason why investors are considering allocation to gold,” reckons Chirag Mehta, a manager at the Quantum Mutual Fund in India.
The giant SPDR Gold Trust (NYSEArca:GLD) yesterday expanded by 1.1% as investor demand created new shares in the world’s largest gold-backed ETF.
That needed an additional 8 tonnes of gold, taking the GLD’s total backing to the largest since August at 772 tonnes with the 4th heaviest 1-day inflow of 2018 so far.
Producer price data for both the UK and Germany on Wednesday meantime defied analyst forecasts of a steep slowdown – foreseen on last month’s falling oil price – with British factories suffering 5.6% annual input-cost inflation ahead of next March’s exit from the European Union.
With the UK Government now readying £2 billion of emergency spending plus armed-forces support for essential supplies and services, Brussels today said it is also starting to implement plans for a “no deal” Brexit.
The British Parliament meantime – set to shut for Christmas tomorrow until Monday 7 January, leaving just 59 working days before Brexit – today moved to hold a debate on whether, under his breath, opposition Labour Party leader Jeremy Corbyn called Prime Minister Theresa May a “stupid woman” as suggested by BBC political editor Laura Kuenssberg on Twitter, a phrase for which the Speaker of the House John Bercow was not investigated earlier this year.
UK gold priced in Pounds per ounce today spiked back to £990, near the highest since June.
Euro gold retreated to €1095, also back in line with where the bullion market began last New Year.