GOLD BARS traded in London’s wholesale market rose back to $1287 per ounce on Friday, halving the week’s previous $20 loss as global stock markets rose within 0.5% of last week’s new all-time high on the MSCI World Index.
Major government bond prices rallied, easing longer-term interest rates lower from this week’s jump, as commodities held flat overall.
Silver traded 10 cents above its 6-week low of Thursday at $16.70 per ounce, while platinum held 1.5% lower from last Friday at $919 per ounce.
The Euro rose versus the Dollar but the British Pound fall back towards yesterday’s 2-week lows as new data cut the UK’s second-quarter GDP growth to a 4-year low of 1.5% per annum and raised the country’s current account deficit with the rest of the world to 4.6% of economic output.
Separate data said London house prices fell year-over-year in September for the first time since the financial crisis of 2009 after national mortgage lending shrank but consumer borrowing grew faster.
Calling the Bank of England’s oversight of financial stability “incredibly well designed”, central bank governor Mark Carney today said UK banks have “not been as disciplined as they should be” in making consumer loans, while predicting an interest-rate rise from the current all-time low of 0.25% “in the relatively near term if the economy continues on the track that it’s been on.”
“An important lesson of the US subprime mortgage crisis was financial institutions lent excessively to people who were incapable of paying back the loans,” said Beijing’s chief financial regulator Xiao Yuanqi of the China Banking Regulatory Commission (CBRC) today.
Now the world’s largest gold-mining and consumer nation, “China must prevent this tendency,” Xiao said, launching an investigation into consumer loans being “misused…to fuel property bubbles.”
After credit-ratings agency S&P downgraded China’s sovereign bonds because of the country’s debt growth, competitor agency Fitch this week reported that money-market loans and ‘wealth management products’ hiding off-balancesheet are being used to fill the gap between bank lending and customer deposits.
Compared with 70% in 2013 and 78% in 2008, “Customer deposits accounted for 61% of total equity and liabilities” at the end of July said Fitch, counting WMPs as contingent liabilities for China’s banks. 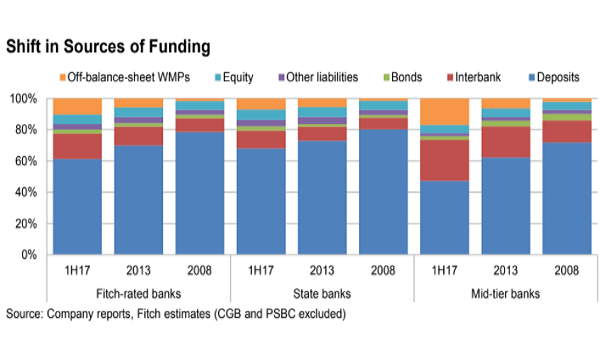 The Chinese Yuan had its strongest quarterly rise since 2011 between July and end-September, but retreated Friday to a new 6-week low as China’s financial markets closed for next week’s National Day holidays.
That cut the Dollar-equivalent premium for gold delivered in Shanghai to $8.40 above London quotes, back below its historic average of $9 per ounce.
Wholesale gold prices in No.2 consumer nation India meantime held at a small discount to London bullion bars as retailers continued to report poor gold sales in this key autumnal festive season thanks to confusion over new anti-money laundering rules.
“There is a pressing need to reform the gold-trading market in India,” said mining-backed market development organization the World Gold Council this week, launching its “vision for a gold spot exchange and its associated ecosystem” of refining, vaulting and financial infrastructure similar to China’s government-mandated Shanghai Gold Exchange.
“These challenges include lack of quality assurance, weak price transparency and fragmented liquidity and regulatory issues,” said the WGC.
Recommending official standards for gold bar sizes and fineness, trading contracts and delivery locations, its report doesn’t highlight India or China’s ban on gold bullion exports.