GOLD BARS traded in the professional wholesale bullion market touched new 5-week highs as London opened for business Tuesday morning, reaching $1187 per ounce as world stock markets slipped again.
Gaining as the US Dollar also rose, gold bullion bars reached 7-week highs at £978 versus the British Pound, which fell hard as fresh concerns over the UK Government’s Brexit negotiations engulfed the opposition Labour Party.
Mid-morning saw the price for 400-ounce Good Delivery gold bars set the highest London benchmark since 30 November, fixing at $1183.20 per ounce for a 4.6% recovery from late December’s 11-month lows.
“Gold seems to be behaving true to January form,” says a note from London brokers Marex Spectron, “with physical [Asian] demand picking up ahead of the Chinese Lunar New Year and investors starting to buy as the great unknown of the Trump presidency looms.”
January has seen gold prices rise between 3.9% and 4.9% in each of the last 3 years.
“Short covering is also in evidence as we approach $1200,” Marex goes on. “However, we are not flying higher, but rather grinding out gains day by day.”
“Gold should continue to push higher,” agrees Swiss refining and finance group MKS’s Asian trading desk, “[to] test a move back above $1200 over the short term.”
“Looking into 2017,” says Canada-based investment bank and bullion clearer Scotiabank’s precious metals team, “we would not be surprised if safe-haven demand picks up as a combination of the implications of Brexit and of Donald Trump’s presidency cause some shockwaves…or better growth and higher commodity prices bring with them inflation.”
Demand for gold ETF investment vehicles shrank again Monday however, with the largest such product – the SPDR Gold Trust (NYSEArca:GLD) – shrinking its holdings of gold bars to a new 9-month low as shareholders liquidated positions.
Together with the second largest gold ETF, the iShares Gold Trust (NYSEArca:IAU), the GLD shrank by 68 tonnes in December according to data compiled and released Tuesday by market-development organization the World Gold Council.
Listed in New York for ease of US investor access, the IAU and GLD between them lost metal equal to more than 8 days’ global gold mining output last month.
Funds listed in Germany, in contrast, grew as prices fell following Donald Trump’s US election victory. 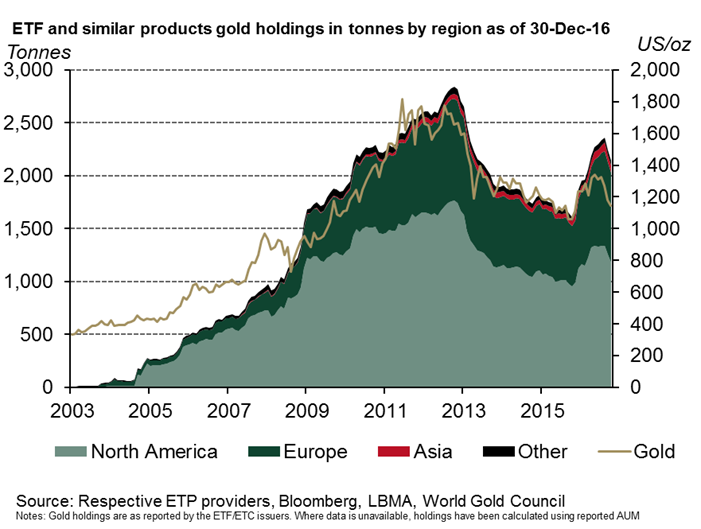 “Any bullish outlook for gold will need to be driven by a recovery in financial interest,” says the latest monthly report from Scotiabank, “[because] physical demand remains depressed.”
Shanghai gold bar premiums held above $19 per ounce versus London quotes on Tuesday, offering new imports more than 7 times the typical incentive ahead of end-January’s Chinese New Year holidays.
The government of Dubai meantime imposed a new 5% import duty on gold and diamond jewelry entering the city state, raising consumer prices in the Middle East’s major shopping destination and hurting demand amongst travellers from India, where high import duty, tax declaration rules and then November’s shock demonetisation of the country’s largest banknotes have already crushed purchases by the world’s No.2 private buyers.
“Physical demand will be completely bad for 2017,” Bloomberg quotes Gnanasekar Thiagarajan at advisors Commtrendz Risk Management in Mumbai.
“For the first time Indians will be trying to buy gold cashless. That’s a big challenge.”