GOLD PRICES sank at their fastest pace 4 months Friday lunchtime in London, retreating below $1350 per ounce – and erasing all the week’s previous 1.2% gains vs the Dollar – after the US reported much stronger-than-expected jobs growth for July.
US non-farm payrolls expanded by 255,000 on the government’s first estimate, way above analysts’ consensus forecast of 180,000.
Added to June’s upwardly revised 292,000 – the strongest in 8 months – that makes for the strongest 2-month US jobs growth of 2016 to date on the Bureau of Labor Statistics’ data.
Unemployment held at 4.9% however as the number of people in the jobs market rose, with some 7.8 million seeking work – a figure showing “little movement since August of last year.”
Initially dropping $15 per ounce from London’s morning benchmark price – formerly known as the Gold Fix – wholesale bullion headed for its sharpest intra-day fall since April Fool’s Day, when stronger-than-expected US jobs data saw gold drop $18 to trade $130 below current levels. 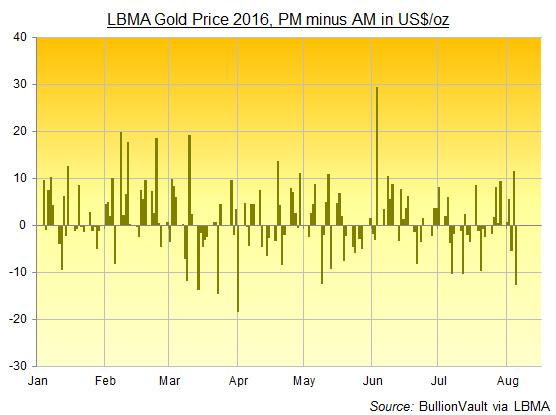 May’s US jobs report – released on Friday 3 June, and the weakest print in 6 years – then saw gold’s 6th strongest Fix-to-Fix gain of the last half-decade, adding almost $30 per ounce to the global benchmark.
Gold priced in non-US currencies held firmer on Friday, gaining 0.5% for the week against the Euro and adding 1% from last weekend for UK investors after the Bank of England cut its key interest rate to a new all-time historic low and unveiled up to £170 billion ($220bn) of new quantitative easing money-creation and asset purchases.
Bullion prices in Shanghai – where gold leasing deals by Chinese corporations to raise to loans are masking a 20% plunge in household gold demand – today neared last month’s new 3-year highs above CNY 290 per gram.
“The concept of a $15 rally on the back of a UK interest rate cut is a new one,” says long-time London broker David Govett at Marex Spectron of Thursday’s rise, “but in this day and age, markets behave very differently and one must adapt or perish!”
“The ultra-loose monetary policy pursued by many central banks,” says German finance group Commerzbank’s analysts, “should lend the gold price good support in our view.
“The Australian central bank cut interest rates [this week], the Bank of Japan and the ECB are continuing their bond purchases for the foreseeable future, and the US Federal Reserve will probably wait some time before implementing its next rate hike.”
Trading in US interest-rate futures today put the odds of a Federal Reserve hike to 0.75% at September’s meeting at 18%, double the odds forecast by trader positioning at Thursday’s close of business.
Silver meantime tracked and extended the drop in gold prices, losing 2% from last Friday’s finish to trade below $20 per ounce for the first time in over a week.