BUY GOLD prices jumped to 4-month highs against the British Pound in London trade Thursday after the Bank of England failed to raise UK interest rates yet again, despite inflation continuing to exceed its official target of 2.0% per year.
With Tehran vowing “resistance” and denying it has any military bases in Syria after Israeli warplanes attacked what Tel Aviv called Iranian positions in the two countries’ war-torn neighbor last night, world stock markets edged higher as crude oil set fresh 3.5-year highs above $77 per barrel of Brent.
US President Trump’s plan to restore sanctions on Tehran over its nuclear research program “may have implications for the [global] market balance,” warns the International Energy Agency, noting that Iran “exports 2.5 million barrels of oil a day and is the world’s fifth-largest exporter.”
Gold priced in US Dollars ticking further above last Friday’s finish to reach $1318, on track for the first weekly gain in five.
Prices for Eurozone investors wanting to buy gold also rose again, re-touching Wednesday’s new 6-month highs above €1109 per ounce.
With consumer price inflation in the UK last reported at 2.5% per year, the Monetary Policy Committee kept Bank Rate at 0.5%, saying it expects inflation “to fall back slightly more quickly” than previously thought.
The Bank of England also cut its 2018-2020 economic growth forecasts for the UK, citing risks and uncertainty over next year’s Brexit deadline for leaving the European Union.
Across the last 10 years, UK interest rates have now matched or exceeded the pace of consumer-price inflation in only 23 of 120 months.
Measured against the Office for National Statistics’ long-run consumer price index, interest rates have now lagged inflation for 101 months – the longest unbroken stretch of negative real returns to bank savers since the Great Depression and war-time era of 1938-1951. 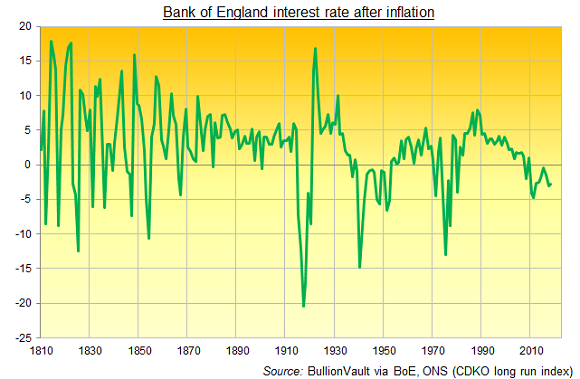