GOLD PRICES returned from the New Year 2017 holiday to track the rising Dollar on Tuesday, pushing higher against non-US currencies as Washington’s president-elect Donald Trump was rebuked by Beijing over his threat to start a trade war with the world’s second-largest economy.
Gold prices held tight around last week’s close of $1151 per ounce, rising to 1-month Euro highs above €1110 as world stockmarkets gained but government bond prices fell again, nudging interest rates upwards.
Gold prices in Shanghai held firm overnight versus China’s Yuan, offering importers a $24 per ounce premium above comparable London quotes – down sharply from the new 3-year highs hit amid tighter import licensing by Beijing before Western dealers shut for Christmas, but still 10 times the average incentive of the last 3 years.
Data released last week put China’s net gold bullion imports through the key conduit of Hong Kong at the lowest since last January in November.
On an annualized basis, however, Hong Kong’s net shipments to China – the world’s No.1 gold consumer, importer and mining producer – held 3.5% ahead of 2015. 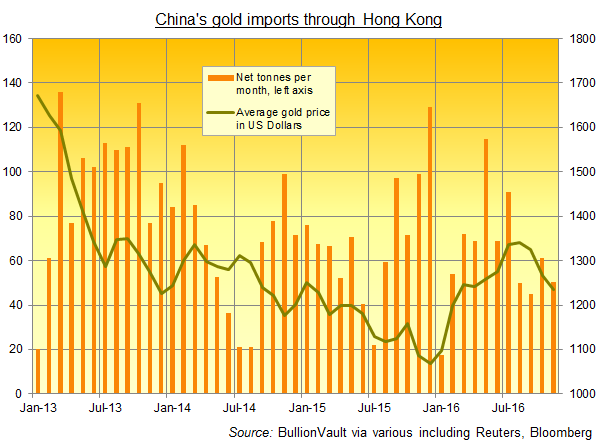 Last Friday saw “decent buying flows out from Asia as gold traded at multi week highs,” says a note from German financial services group Commerzbank.
“2017 is likely to remain a volatile trading year for gold with US Dollar strength to be investors’ focus again.”
Gold prices rose 9.1% in 2016 against the Dollar as the US currency rose towards 14-year highs on the FX market.
“Chinese New Year demand is expected to support the metal over the short-term,” says a gold price note from Swiss refiners and finance group MKS Pamp, “[but] consolidation above $1160 will be required for a run higher.”
Gold’s underlying trend “is bullish [but] momentum is negative,” counters the last technical analysis of 2016 from bullion bank Scotia Mocatta’s New York office, “remain[ing] biased to the downside as long as gold closes below 1173.50” per ounce.
After Beijing’s official FX reserves fell to 6-year lows at end-2016 as money continued to leave, the government today announced new currency exchange rules, requiring banks to report all client FX trades above CNY 50,000 (currently $7,000) from July – rules which do not represent “capital controls” according to the state-run Xinhua news agency.
Cash outflows from Hong Kong, plus a withdrawal of cash liquidity from the Chinese banking system, were meantime blamed Tuesday for a spike in short-term interest rates in the city’s financial markets, repeating a move seen at the start of 2016.
“Anyone fancying a trade war with China might have missed their best opportunity,” Xinhua reports elsewhere, apparently targeting US president-elect Donald Trump and quoting Beijing officials saying that “the Chinese economy has already passed the stage of being vulnerable to such actions” thanks to shifting away from needing ever-greater exports to support economic growth.
Due to take power in less than 3 weeks’ time, Trump today tweeted that “China has been taking out massive amounts of money & wealth from the US in totally one-sided trade” and added that US-listed General Motors (NYSE:GM) should “make [cars] in USA or pay big border tax!” on its Mexico-made vehicles.
Reuters says Trump’s transition team have asked US border agencies to assess their capacity to build new walls and barriers, as well as expanding migrant detention facilities, in line with his campaign promise to cut immigration from Mexico.
“As bonds are no longer a safe haven,” says the Global Asset Allocation Strategy team at French investment bank and bullion market maker Societe Generale, “our quantitative portfolio recommends cash to protect portfolios in risk-averse periods.
“We also consider gold and Japanese bonds – protected by the [Bank of Japan’s zero-yield] policy – to be true safe assets for 2017.”
With gold imports to non-mining No.2 consumer India meantime estimated down to the lowest since 2003 for last year as a whole, leading dealers in the sub-continent now predict a one-third drop in 2017 household demand from 2016’s depressed levels according to local media, as the cash crunch caused by the government’s shock demonetisation of the largest banknotes continues to dent spending and confidence.