GOLD PRICES slipped within $1 of yesterday’s new 2018 lows in Dollar terms in London on Wednesday as the US currency traded near this week’s new multi-month highs on the forex market.
World stock markets rose but silver also held flat, down 1.5% for this week so far at $16.33 per ounce, as commodities gained and US crude oil edged above $66 per barrel – a 3-year high when reached in January 2018.
Seasonally adjusted, the United States’ current account deficit with the rest of the world widened to its worst level since 2008 in the first quarter of 2018, new US data said meantime.
Vowing to “rebalance” the latest round of US trade tariffs, the European Union said it will start imposing a 25% charge on a range of US imports from Friday.
“Great uncertainties loom regarding where Trump’s nationalism will end up,” says China’s state-run Global Times news-site, calling the US President’s “hard-line immigration policy of separating children from their parents on the US-Mexico border [another] nationalist practice.
“Against such backdrop, China must keep sober [and] adapt itself to the changing situation.” 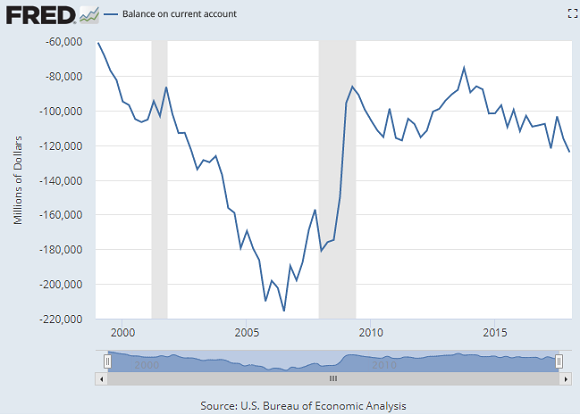 “We have made some recent positioning changes to reflect belief of a stronger Dollar in the near-term,” writes Russ Koesterich, a portfolio manager in the multi-asset strategies group at investment fund and brokerage giant BlackRock Inc. (NYSE:BLK).
“Specifically, we increased the fund’s overweight exposure to the US Dollar and decreased exposure to emerging market bonds and gold – asset classes known to be inversely related to the Dollar.”
The largest single owner of shares in the gold-backed SPDR Gold Trust (NYSEArca:GLD), Blackrock cut its holdings by 25% in the first 3 months of this year, regulatory filings show.
Now worth $1.6 billion, Blackrock’s total position in GLD – including client holdings held in nominee accounts – equates to less than 3% of the corporation’s top holding, Apple Inc. (NASDAQ:AAPL).
Koesterich’s fund, the Global Allocation offering, ended May holding nearly 3 times as much cash as commodity-related investments.
“We think this rally in the Dollar is driven by ‘easier’ US financial market conditions,” Blackrock’s note goes on.
“Specifically, credit conditions remain benign…and as a result high-yield spreads remain extraordinarily low” – a point also noted Tuesday by macro analysts Cantillon Consulting.

“While the US fiscal and current account deficits suggest a weaker Dollar in the long term,” says Blackrock, “fundamentals in the near-term look supportive” – most notably Europe’s economic slowdown relative to the US.
As gold prices ticked up to $1274 per ounce Wednesday, the Dollar held near this week’s new multi-month highs against most other major currencies, keeping the Euro near late-May’s 10-month lows at $1.15 – down over 5 cents from last week’s top.
That kept the gold price for Eurozone investors at €1100 per ounce.
Ahead of yet another vote in the British Parliament over next March’s Brexit deal with the EU, Sterling meantime rallied half-a-cent from its lowest Dollar value since November, keeping the UK gold price in British Pounds per ounce above £966 – the middle of its trading range over the last 8 weeks – as new data said UK manufacturing orders are rebounding.
Unless a clear plan is ready by October, ratification of any Brexit deal by all remaining EU member states “could take two decades” said the European Parliament’s chief negotiator Guy Verhofstadt to British lawmakers today.
Looking at near-term gold demand from China – the No.1 consumer nation – “The stronger Dollar will continue to quell Chinese demand at these lower [gold price] levels,” reckons today’s note from Swiss refining and finance group MKS.
Overnight the Chinese Yuan slipped towards new 2018 lows, losing over 3% against the Dollar from April’s 3-year highs.
“[While] one would think gold should perhaps be higher given the uncertainty,” says MKS, “instead it is trading like any other commodity…not immune from the risk-off sentiment despite its safe-haven qualities.”
“Demand for XAU puts [now] outstrips demand for XAU calls in the options market,” says a note at news and analysis site FXStreet, pointing to the rising price of bearish over bullish contracts on the Comex derivatives exchange.
“The shift indicates the investors are likely expecting a deeper drop” in the Dollar gold price.