SPOT GOLD held at 3-session lows Wednesday lunchtime in London, trading at $1247 per ounce as world stock markets edged up to new all-time highs ahead of today’s US Federal Reserve decision, widely expected to leave rates and QE bond holdings unchanged.
Major government bond prices ticked higher, nudging the yield offered by 10-year US Treasurys down one notch from yesterday’s 10-session highs of 2.33%.
The US Dollar rallied over 1 cent versus the Euro from yesterday’s touch of 30-month lows at $1.17 to the single currency.
Primarily used in autocatalysts to clean emissions from gasoline engines, palladium meantime held firm around $860 per ounce despite news that the UK government wants to join France in banning the sale of new petrol and diesel cars and other light-duty vehicles from 2040.
The price of platinum – needed in diesel catalysts but finding a greater proportion of annual demand from non-auto uses – gave back the last of last week’s 1.4% gain, retreating to $921 per ounce.
“Precious metals,” says a weekly commodities note from Canadian brokerage TD Securities, “[have] received a boost from low global real interest rates, a slumping USD, growing ambiguity surrounding Fed interest hikes, and ECB go slow normalization policy mantra [on Eurozone rates and QE].
Raising its key interest rate by 0.5% since February, the US Fed has in fact seen real interest rates – after accounting for the Consumer Price Index – rise 1.4 percentage points as that official measure of inflation has slowed. 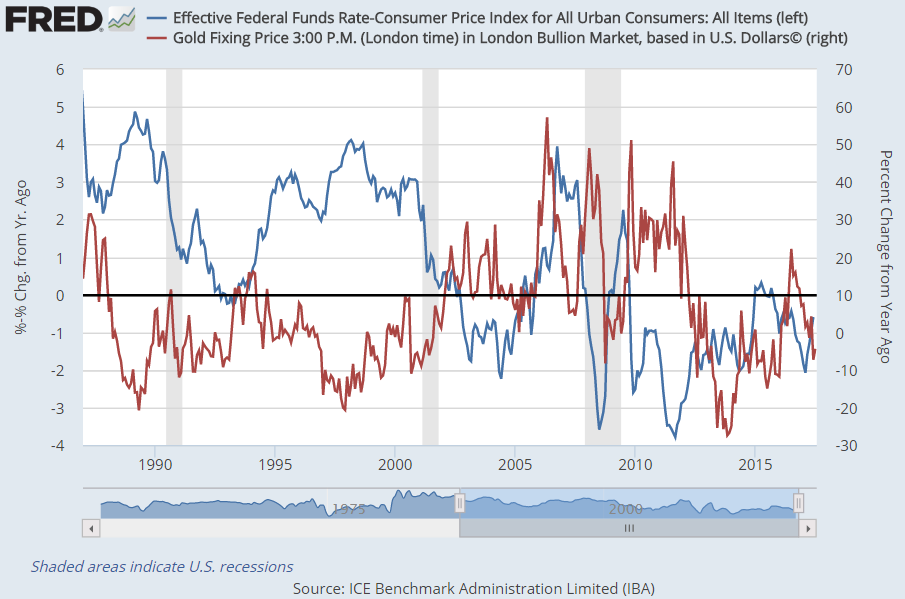 “Spec positioning suggests silver has plenty of room to rally,” TD adds, after latest data showed hedge funds and other money managers placing record bets against silver prices on the Comex futures and options exchange last week.
Silver tracked the spot gold price‘s retreat and slight rally ahead of the Fed on Wednesday, also holding 0.7% lower for the week so far at $16.41 per ounce.
“[Despite] equity prices looking increasingly expensive, particularly when compared against gold,” says the latest weekly note from specialist analysts Metals Focus, “institutional investment in gold has so far remained light in absolute terms and even more so when it comes to its share of overall investable assets.
“[But] we are sceptical that fiscal accommodation in the US will see the country’s growth accelerate materially [while] monetary policies are likely to remain highly accommodative [and] macroeconomic and geopolitical risks will persist.
Altogether, this “should offer gold a boost later this year,” says Metals Focus, but for now “we expect gold prices to remain in a period of consolidation.”
“Spot Gold is roughly in the middle of the range which has dominated over the past 4 months,” says the latest technical analysis from Karen Jones at German financial services group Commerzbank, pointing to the March low of $1195 and June’s 7-month peak $100 higher.
“Very near term we would allow for some slippage to the 200 day [moving average] at $1229,” says Jones.
“Our longer term [bullish] bias will only be confirmed on a break and weekly close above [the June high at] $1295.79…”
Between here and there however, spot gold prices are “likely to test again soon” the downtrend joining the peaks since the metal’s all-time high of September 2011 at $1920, says the latest analysis from Jonathan Butler at Japanese conglomerate Mitsubishi.
“This level, [now] at $1253…is especially significant,” Butler says, “as it coincides with the first Fibonacci retracement of the 2011 high to 2015 low” – meaning a 23.6% recovery of spot gold’s peak to low, in line with a mathematical series widely followed by technical analysts