SILVER PRICES extended their sharp rally in London trade Thursday, reaching new 11-week highs for US investors at $17.30 per ounce while gold edged back from an overnight rise.
Tokyo and Shanghai’s stock markets closed the day higher, but other major equity markets held flat as base metals and crude oil pushed the CRB Commodities Index up to its highest level since late 2015.
Silver held 4.0% higher for the week so far as New York opened for business, while gold at $1348 was barely changed from last Friday.
That pushed down the Gold/Silver Ratio of the two metals’ relative prices to its lowest level since 30 January, with one ounce of gold equal to 77.9 ounces of silver.
The ratio has averaged 71.0 over the last 5 years, rising to 2-year highs near 82 this spring as hedge funds bet heavily on silver falling. 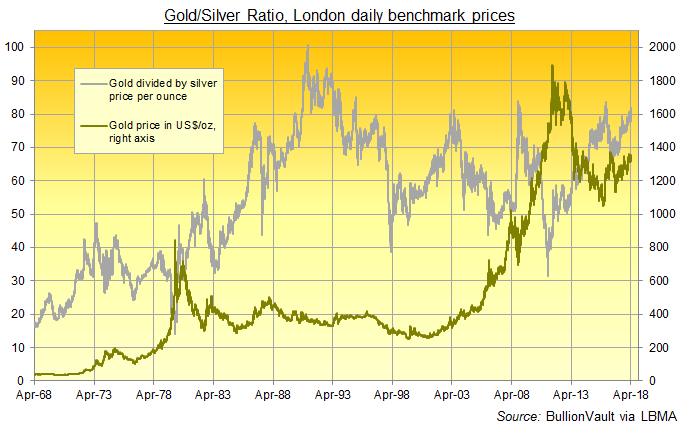 Over in China overnight, and with Dollar gold prices trading at their highest level around Shanghai’s daily benchmarking auction since late-March’s sharp rise in US-China ‘trade’ war tensions, the Yuan price of bullion held unchanged on the day.
That cut the premium for gold landed in the world No.1 consumer nation one-third below the average incentive for new imports out of London – heart of the world’s wholesale bullion trade.
Gold prices in India also stayed soft on Thursday, with wholesale bars trading at a $0.75 per ounce discount to London quotes after accounting for the No.2 consumer nation’s 10% import duty.
Indian households made only “token” purchases of gold and silver for the Hindu festival of Akshaya Tritiya yesterday, Business Today reports.
“Consumers want to make purchases for Akshaya Tritiya,” Reuters quotes one Hyderabad retailer, “but they are not comfortable with the current price.
“They are making smaller purchases.”
Besides the 4% rise in Rupee gold prices so far this year, dealers also blamed the festival’s lackluster sales on a shortage of bank notes – denied by the Finance Ministry but met with extra note printing by the Reserve Bank of India.
After China reported solid 6.8% economic growth for the first quarter, led by consumer spending, “With the growth of high-end consumption and the development in second- and third-tier cities, the Chinese gold market will show substantial demand,” said China Gold Association director Song Xin last week
“[It’s] mostly unexplored for physical gold. More and more people [will] start to realize gold’s stored and retaining values in the long term.”