SILVER PRICES rallied with gold and both metals recovered last week’s closing level in US Dollar terms in London trade on Friday.
Silver prices rose above $16.40 per ounce as government bonds rose with world stock markets and commodities ahead of key US data on retail sales and consumer-price inflation.
Separate data overnight said China’s banks extended more new lending than forecast in April, but were likely overtaken by so-called ‘shadow banking’ loans now facing a crackdown by the Communist authorities.
Silver prices gained almost 1.9% by Friday lunchtime from Tuesday’s 5-month low, rallying faster against other currencies as the US Dollar also gained on the FX market.
“Silver resisted a further test lower in New York on Wednesday,” says a trading note from Swiss refiners MKS Pamp, “with the recent sell-off now looking overdone and interest, albeit likely timid interest, creeping back into the market.”
Gold prices today extended their rally to 1.1% from Tuesday’s 3-month low at $1214 per ounce as Brent crude oil edged further above $50 per barrel.
The EuroStoxx 50 index ticked higher for the day, but held 0.9% below last Friday’s 2-year closing high.
“[Silver] has extended the down move and is now breaching the trend line from December 2015,” says technical price-chart analysis from bullion market-making investment bank Societe Generale, pegging “next support” at the late-2016 low of $15.64 per ounce.
Alongside this week’s 5-month lows in the silver price, the iShares Silver Trust (NYSEArca:SLV) has grown to its largest size since early January, needing almost 10,532 tonnes of bullion to back its value.
The largest silver ETF, it now equals more than 38% of 2016’s global silver mine output as reported in Thomson Reuters GFMS’s new Silver Survey 2017, published Thursday for the Washington-based Silver Institute industry group. 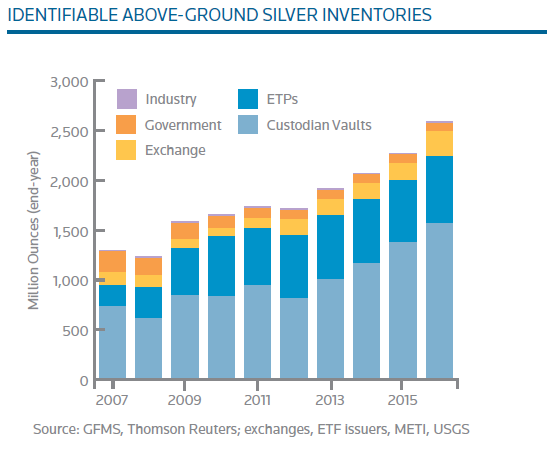 More surprising than last year’s 0.5% drop in mining output – “due to lower capital expenditures in prior years” – was a plunge to quarter-century lows in scrap silver flows, says GFMS, as a rise in European recycling was outweighed by continued falls in North America (on tighter due diligence of refining feedstock), East Asia (where weak industrial demand also saw users run down existing stocks of metal) and Japan (which saw Yen prices fall, deterring sales).
On the demand side, silver buying outside exchange-traded trust fund vehicles dropped over 10% from  2015’s record high to a 5-year low, says GFMS, with declines across each segment of bar and coin investing, jewelry and also industrial offtake.
“Both the photovoltaic and ethylene oxide sectors saw record high demand for silver,” says GFMS’ survey, “despite ongoing thrifting” by manufacturers reducing the quantity of metal needed in solar energy panels and for chemical catalysis.
PV silver demand rose by more than one-third to record high levels “as the number of global installations shot up,” says GFMS.
All told, that pushed identifiable silver stockpiles now above-ground up 14% to 30 months’ of global demand on GFMS’ data – the highest level in 21 years on the specialist analysts’ data series.