GOLD BULLION again dipped to $1340 per ounce Wednesday morning in London and silver prices also re-touched their lowest since Friday as world stock markets extended yesterday’s 1.7% drop in US equities.
Commodity prices fell for a second day as US bond prices jumped again, pushing the yield offered by 10-year US Treasury debt down to 2.76% – the lowest rate since early February.
While gold yesterday touched 5-week highs against the Dollar at $1356 – heading for its highest quarterly finish since the 2013 gold crash – silver prices managed only a 2.5-week high, dipping today to $16.46 to head for a 2.6% loss from New Year 2018.
With silver easing back in lock-step with gold today, the Gold/Silver ratio – which measures how many ounces of silver you could get for an ounce of gold – held at 81.3, just shy of this month’s peak.
“Resistance is at 81.86,” says London bullion clearing bank Scotia Mocatta’s New York office in a technical note, pointing to that 2-year high.
“Support is at 80.27 – the 23.6% Fibo retracement level of the Jan-March rally” in gold’s value relative to silver. 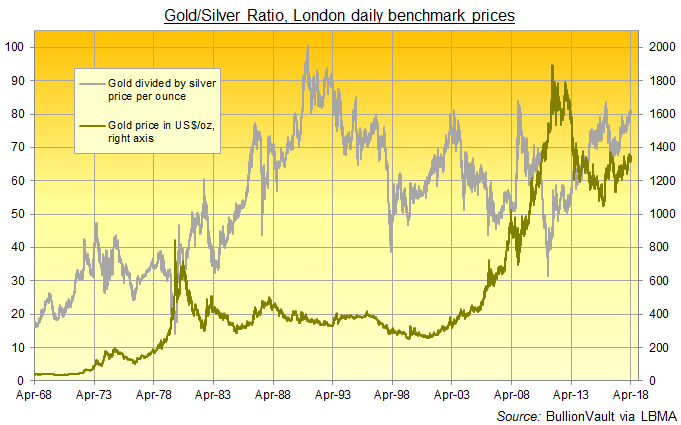 With industrial use accounting for 55% of annual demand according to Washington-base trade group the Silver Institute, consumption of the metal is more exposed to poor economic growth and sentiment than gold, which now finds only 10% of demand from industrial applications.
Last time the Gold/Silver Ratio held above 80 was in 2016, when the growth rate in world No.2 economy China slowed.
Before that was during the financial crisis in 2008, with all-time highs above there set during the global economic recession of the early 1990s.
“There’s just not many people looking to buy silver at this point in time,” MarketWatch last week quoted Walter Pehowich, senior vice-president at US precious metals wholesaler Dillon Gage, pointing to the recent jump in the quantity of silver stockpiled in Comex approved depositories in the United States.
Silver holdings in London’s specialist wholesale vaults grew by 11% in the 12 months to November, the latest data available from trade body the London Bullion Market Association.
“Short covering is likely to have occurred during the recovery of prices,” says the latest weekly note from strategist Jonathan Butler at Japanese conglomerate Mitsubishi, because “before [last week’s rate-hike] news from the Federal Reserve, silver futures investors became extremely bearish.
“Gross short positions [were] the highest since July 2017 and 95% of that all-time high. [That] pushed the net long book [in speculative futures contracts] to a fresh all-time low…in danger of the market going net short.”
Counting both silver futures and option contracts, the Managed Money category of Comex speculators last week held their most bearish position on record.
“Evolving within a choppy consolidation, silver has so far defended the upward sloping trend drawn since December 2015 at $16.20/16.01,” says a technical analysis from French investment and London market-making bullion bank Societe Generale.
“That also represents the lows of February and the [Fibonacci number] 76.4% retracement from December last year.”
Tuesday saw the collective share price of the so-called FANGs – Facebook, Apple, Netflix and Google – suffer their worst ever 1-day plunge, dragging the tech-stock Nasdaq index down to its worst 1-day drop since 2016.
Wednesday’s share-price drop knocked 1.0% off Tokyo, 2.5% off Hong Kong and 1.8% off Shanghai.
European equities stood 1.0% lower by late-morning in Frankfurt, trading over 5% down from this time last year on the EuroStoxx 50 index.