GOLD PRICES held onto last week’s 1.4% gains in London trade Monday but silver slipped amid a rally in the Dollar on the forex market.
World equities pushed up to fresh all-time record highs as major government bond prices also rose, pushing interest rates lower.
European banking stocks lagged the broader gain in equities, however, after Germany’s Deutsche Bank said at the weekend it will post a small loss for Q4 2017 thanks to US President Donald Trump’s US tax reforms, now blocking it from claiming a credit against €1.5 billion ($1.8bn) of prior losses.
Silver prices retreated 0.4% as the Dollar rose, holding at 5-week highs for non-Dollar investors.
Gold meantime held just shy of $1320 per ounce, gaining 6.8% against the Dollar since the US Federal Reserve raised its key interest rate as expected in mid-December.
“The tax reform is mixed bag for gold,” says a note from US financial services group Bank of America-Merrill Lynch, forecasting an average gold price of $1350 per ounce this year.
“A potential US Dollar rally in [early] 2018 may increase headwinds, but rising inflation, a higher budget deficit and linked to that, the risk of a sustained decline of the US currency medium-term are supportive.
“The tax cuts enacted by the US Congress are unlikely to provide significant support for the US Dollar,” counters French investment bank Societe Generale.
“The Fed should tighten only very gradually…[So go] long commodities; long gold & gold miners.”
Federal Reserve 2018 voting member Patrick Harker on Friday said he wants to see just 2 more rate rises this year, because “If soft inflation persists it may pose a significant problem.”
The last week of 2017 saw hedge funds and other money managers trading Comex gold futures and options hike their bullish bets, net of bearish contracts, by 39% according to the latest data from US regulators the CFTC.
Reaching the largest size since mid-November, the net speculative long position of the Managed Money category rose almost one fifth above the last 10 years’ average.
Silver betting meantime swung back to positive after recording 3 weeks of ‘net short’, the first time since July marked the first such positioning in almost 2 years. 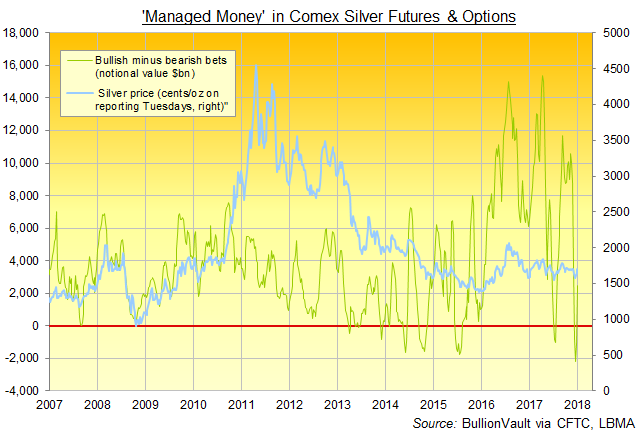 “Silver was unable to test above Friday’s high during Asian hours today,” says one trading desk in a note, “[but] should continue to see support around $16.95, the 200-day moving average.”
“Resistance remains unchanged at $17.38,” adds the New York team at bullion bank Scotia Mocatta, pointing to the metal’s high in November.
Monday’s Dollar rally saw the Euro fall to a 1-week low, down more than 1 cent from Thursday’s top near 3-year highs despite a raft of positive data on retail sales and economic confidence.
That took the gold price in single currency terms up to its strongest since mid-November at €1103 per ounce.
The UK gold price in Pounds per ounce traded flat below Friday’s 5-week high of £975 as Sterling held firm despite what pro-Brexit, pro-Conservative newspaper The Telegraph called a “chaotic” Cabinet reshuffle of senior ministers by Prime Minister Theresa May.
China’s benchmark gold price traded overnight back up to $8 per ounce above comparable London quotes, just below the average incentive for new imports to the world’s No.1 consumer market.
But with 6 weeks until the Year of the Dog begins, “Chinese New Year demand is yet to pick up as the prices are too hard to swallow,” Reuters quotes one trader in Singapore.
This close to Lunar New Year 2017, the Shanghai premium was more than 3 times today’s level.