GOLD and SILVER edged higher against a falling Dollar in Asian and London trade Monday, each gaining half-a-per-cent after traders in world No.1 consumer country China returned from national holidays.
Gold prices at one point touched $1284 per ounce, some 1.9% above Friday’s fresh 8-week low, as the US currency retreated against major rivals and world stock markets fell for a second day from last week’s fresh all-time record highs.
Silver touched 2-week highs at $16.98 per ounce, jumping almost 4% from Friday’s low after new US jobs data showed the unemployment rate falling and average wages rising more strongly.
Latest data say that hedge funds and other money managers trading Comex silver futures and options contracts trimmed their bullishness ahead of last week’s key US data.
Despite cutting their net speculative position as a group to a 5-week low however, the Managed Money category of Comex traders were still 130% more bullish overall than their historic average. 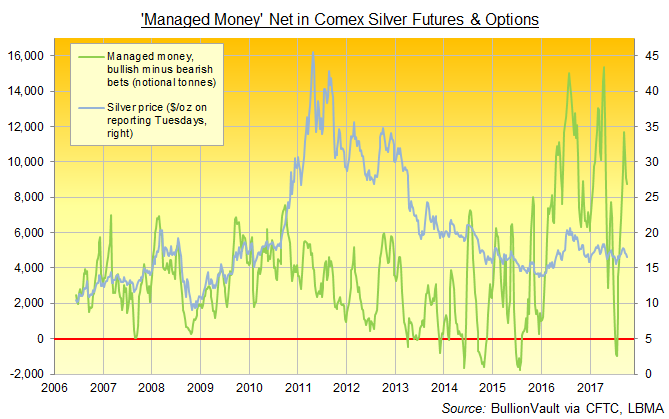 Net bullish betting by money managers on Comex gold derivatives also fell for the 3rd week running on the latest positioning data, down to a 7-week low some 54% larger than the historic average.
Both metals rallied Monday lunchtime against the Euro as the single currency then slipped back on the FX market.
“The ECB is likely to deliver a ‘dovish’ tightening of policy later this month,” reckons Chinese bullion and investment bank ICBC Standard’s FX strategist Steven Barrow, “but yields are still seen drifting higher with periphery yields still at risk from the Catalonian crisis.”
National police today took up positions around the Court of Justice of Barcelona – “unprecedented in the last decade,” according to newspaper El Pais – ahead of the regional parliament possibly moving to declare independence tomorrow, despite October 1st’s officially illegal referendum getting only 40% voter turnout with some 350,000 people protesting their wish yesterday to keep Catalonia part of Spain in the city’s Urquinaona Square.
The government of France today stated that it will not recognize a declaration of independence by the north-east Spanish region.
Spanish bond prices meantime steadied, rallying from last week’s 6-month lows to keep 10-year yields below 1.67%.
For gold, “we [also] expect to see support leading into the October 10 anniversary of the founding of [North Korea’s] ruling Korean Workers Party,” says a trading note from Swiss refiners and finance group MKS, “with many fearing that the hermit state may use this day to carry out a further act of provocation” such as another missile test.
Meantime Monday’s return of Chinese traders from their week-long National Day break saw the Shanghai gold premium – over and above comparable London quotes – leap to $12 per ounce at the city’s afternoon benchmark auction, the highest since June and 40% greater than the historic average.
“Underlying physical demand kept price action buoyant,” says MKS’s Asian trading desk.
“Support remains unchanged at $1263.20,” reckons the latest technical analysis from bullion bank Scotia Mocatta’s New York team, pointing to “the 61.8% Fibo retracement level of the July
Low-September High range.
Below that comes the 200-day moving average, Scotia says, now at $1252.80 per ounce.
Latest import data for leading consumer-nations show silver inflows to China and India growing strongly, with the picture for gold more mixed.