SILVER slipped with other precious metal prices on Thursday in London, holding firmer than gold but weaker than platinum as Eurozone stock markets rose following US President Trump’s positive trade meeting with European Commission chief Juncker, plus a “no change” decision from the European Central Bank.
Trump overnight claimed his meeting with the EC president showed that the US and EU “truly love each other”, with both sides wanting to strengthen their “$1 TRILLION bilateral trade relationship – the largest…in the world.”

Great meeting on Trade today with @JunckerEU and representatives of the European Union. We have come to a very strong understanding and are all believers in no tariffs, no barriers and no subsidies. Work on documents has already started and the process is moving…

“China should really start to worry about Trump,” writes Financial Times columnist Edward Luce, saying that Europe’s “reprieve” will intensify US pressure on Beijing.
Looking at global silver demand, “2018 will be a challenging year for China’s solar market,” says the latest weekly note from specialist analysts Metals Focus, “as it takes steps to ultimately becoming a subsidy-free industry.”
Such “turmoil” is hitting the global photovoltaic market because other leading consumer nations are also looking to end ‘feed-in tariff’ subsidies, says Metals Focus.
“The slump in [solar cell] prices caused by oversupply will also force PV companies to restructure and accelerate their cost reduction roadmap to help survive during this transition period.
“[That means] for the short-term at least, silver PV demand may have peaked.”
Automotive silver demand in contrast could quadruple over the next 20 years, says a new analysis from Thomson Reuters GFMS Rhona O’Connell, driven by “stellar growth” in demand for electric vehicles. 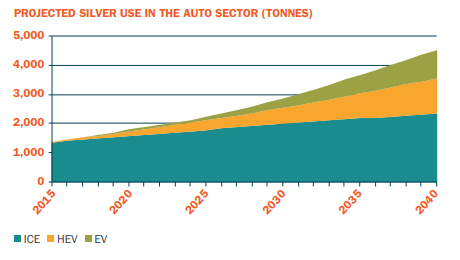 2040 represents a “keystone” for government promises worldwide to ban sales of traditional internal-combustion engine vehicles, O’Connell notes.
By then, automotive use of silver could jump from 3% in 2015 to 15% of the metal’s total annual offtake according to GFMS’s analysis.
The European Central Bank meantime held its key deposit rate negative once more on Thursday, vowing again to press ahead with reducing and then ending its program of additional QE bond purchases by the end of 2018.
That left the Euro currency unchanged after losing half-a-cent to the Dollar on news of the Trump-Juncker meeting overnight,
Gold fell back to show a $1 loss for this week so far in Dollar terms at $1228 and also erasing yesterday’s 0.5% rise versus the single currency Euro to stand back at €1048.
Platinum prices have now risen 5.8% from last Thursday’s plunge to new 14-year lows in US Dollar terms.
Silver has risen 2.4% from that day’s 3-month low, while gold has gained 1.4%.