GOLD PRICES held most of yesterday’s 1.0% jump against the Dollar and touched new 3-week highs for Euro investors on Tuesday, trading higher as crude oil rose and Saudi Arabia accused Iran of “direct military aggression” tantamount to a declaration of war.
Wall Street’s S&P500 index of US stocks ended Monday with its 11th new record closing high in a month.
Crypto-currency Bitcoin today rallied to regain half of Monday’s 6% drop, trading back above $7000 after hitting 5 new daily all-time highs in succession last week.
Crude oil spiked Tuesday to new 2.5-year highs, while Arabian stock markets fell hard – down over 3% – as news broke of further detentions and sanctions against senior Saudi figures by new crown prince Mohammed Bin Salman.
“We expected to some interest in gold following the close above $1280,” says one Asian trading desk in a gold price note, “[but] Chinese selling appears to be capping the market.”
“Stocks are at record highs, so you don’t need gold,” says George Gero at the wealth management division of Canada’s RBC.
“Gold will turn around when equities start to correct.”
Comex gold futures and options have over the last 6 weeks seen their longest streak of speculative liquidation since Donald Trump won the US presidency this time last year, according to positioning data compiled by US regulators the CFTC.
Touching $64 per barrel overnight, Brent crude oil today reached its most expensive value against gold bullion since July 2015 at 20 barrels per ounce. 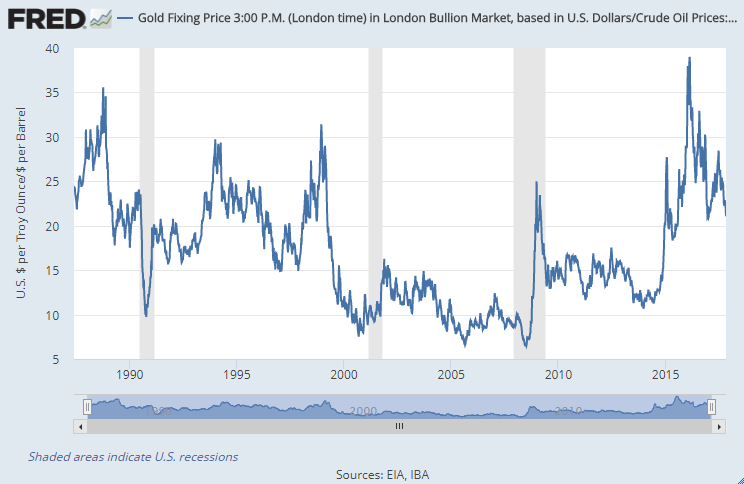 “The involvement of Iran in supplying missiles to the [Yemen rebel] Houthis is a direct military aggression,” the Saudi news agency last night quoted Crown Prince Mohammed Bin Salman, adding that yesterday’s missile launch “may [therefore] be considered an act of war against the Kingdom.”
After a helicopter crash killed a senior Saudi prince yesterday, a Saudi Royal Court release today mourned without explanation the death of 44-year old Prince Aziz, youngest son of King Fahd, who had reportedly been arrested in Sunday’s purge.
Asian stock markets rose and European equities held flat as bond yields edged lower.
Gold prices traded at $1277 per ounce and touched EUR1105 as the start of US trading approached.
“Brent crude is reclaiming the decadal trend line,” says a technical note from analysts at French investment bank Societe Generale, “extending its up move [and] finally crossing beyond [that] upward trend line drawn since 1998.”
This “breakout” has also seen bullish betting by speculative traders jump to a 6-year high, SocGen notes, supporting the new “upside momentum” in energy costs.
New data from China’s central bank meantime said Tuesday that it failed to grow the country’s national gold reserves for the 12th month in succession, even as total FX reserves rose for the 9th month running to reach $3.1 trillion.
No.2 gold consumer nation India has seen household demand for the metal fall 25% since last November’s shock demonetisation of larger bank notes, the Economic Times reports today, citing a trade association estimate.
Stockmarket-listed jewelry giant Titan Co, in contrast, expects its sales to show a 25% rise this financial year, driven by demonetisation and other anti-black market measures hitting India’s smaller, informal and traditional family-run artisan jewelers.