PLATINUM PRICES measured in Euros fell to a near-10 year low on the first trading day of H2 2018, while gold stayed close to this year’s low as the US Dollar strengthened again, writes Steffen Grosshauser at BullionVault.
For US investors, gold fell $3 from last week’s close at $1252 per ounce, moving closer to the 6-month low at $1246 to which the yellow metal crashed last Thursday.
Silver meantime fell through $16 per ounce, also touching its lowest Dollar price since mid-December, as platinum fell to a 29-month low at $838 per ounce having already declined by 6.2% in June alone.
For Euro investors however, the grey metal fell to €719 per ounce – the lowest level since 6 January 2009. 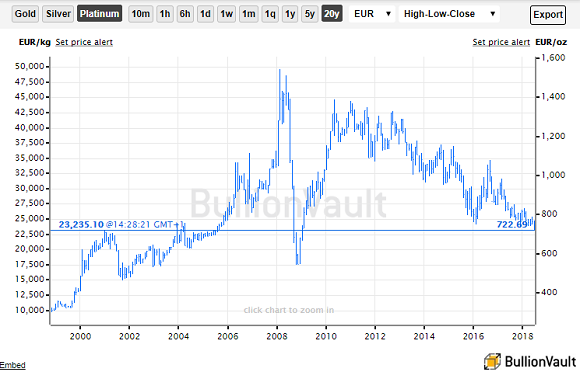 “Commodities face a twin threat in the coming months,” according to analysts at US investment bank Morgan Stanley, pointing at the risks to consumption from a potential escalation in global trade tensions and an economic slowdown in China.
“It is quite possible that we have not seen the bottom [for gold] yet,” warns Canadian brokerage TD Securities, saying that traders are ignoring signs of weaker economic data and a loss of risk appetite.
“[But] a pragmatic approach on the part of the US central bank, as we approach the end of the US tightening cycle, should eventually weaken the USD and should be quite supportive of gold,” the TDS analysts added.
“We also think that the negative fallout from Washington’s aggressive trade rhetoric will soon bite the US itself.”
“The US Dollar has been the biggest beneficiary as investors’ first choice safe haven,” reckons Gavin Wendt, senior analyst at MineLife Pty, speaking to Bloomberg.
“This has indirectly led to gold price weakness, as the Dollar and gold typically move inversely to each other.”
“[But] with the emergence of inflation, gold is likely to find a bottom as the Dollar’s gains weaken.”
US consumer prices accelerated in the year to May, new data showed Friday, with the underlying inflation rate reaching the Fed’s 2% target for the first time in six years.
European stock markets on Monday followed their Asian counterparts sharply lower as the European Union set out plans for retaliatory tariffs for the United States worth $300 billion after President Trump announced he would put new tariffs on European cars.
Speaking to Fox News, Trump suggested that the EU was “possibly as bad as China, just smaller”.
The US is also due to impose $34 billion of tariffs on Chinese exports. According to two new surveys, Chinese manufacturing activity slowed last month as the Yuan experienced its sharpest drop since devaluation by China’s government in August 2015.
Trump meantime tweeted congratulation overnight to new president of Mexico, Andrés Manuel López Obrador, elected by a landslide on a ticket of fighting corruption.
Left-wing former mayor of Mexico City, Amlo has called Trump “erratic and arrogant” and said that the real-estate magnate’s demands for a border wall paid for by Mexico “goes against humanity, it goes against intelligence and against history.”