PRICES to buy gold stabilized in London on Wednesday morning, trading $2 higher to $1194 per ounce even as the US Dollar pushed other currencies lower once more and global stock markets extended yesterday’s drop on Wall Street.
Commodity prices also retreated and the Chinese Yuan fell again versus the Dollar after China’s weak manufacturing surveys for August were followed by news of a slowdown in its services sector.
“I’m not looking for the emerging-markets cycle to turn until we get close to the end of the [US] Fed’s tightening cycle,” says Marc Chandler, head of currency strategy at financial services firm Brown Brothers Harriman in New York.
“Emerging markets are needing to import capital for current account and budget deficits. It’s hard to imagine how they’re going to compete with the US for the world’s savings.”
Current betting on this month’s Federal Reserve rates decision puts 99.8% odds on a hike, with more than half of all bets on next June’s Fed meeting now expecting a further hike by mid-2019.
“People are [also] now looking beyond idiosyncratic issues [in emerging markets] and more generally at spillover and contagion,” the Financial Times quotes one analyst, pointing to how last month’s sell-offs in Turkey and Argentina are spreading, hitting Indonesia on Wednesday and pulling the MSCI developing-market share index down 1.4% for the day and 4.4% lower from a week ago.
Measured on a simple unweighted index against the US Dollar, the currencies of Brazil, Russia, India, China and South Africa – christened the BRICS by then-Goldman Sachs economist Jim O’Neill in 2001 – are now trading just above the multi-year lows hit as the Federal Reserve began raising its interest rate from 0% at the end of 2015. 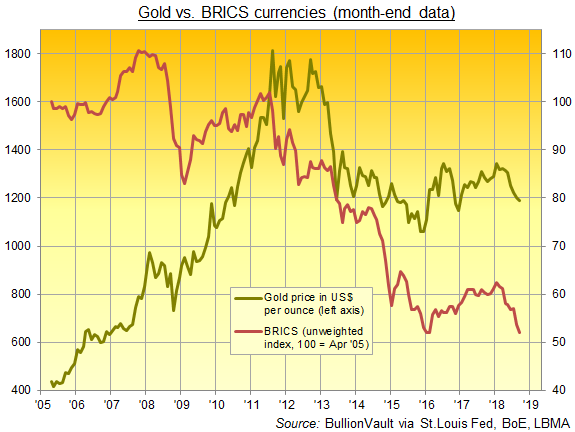 “On balance,” says the latest weekly analysis from specialists Metals Focus, “while a stronger Dollar may act as a headwind for gold, we still believe that the economic backdrop will eventually become supportive of higher gold prices.
“A notable decline in emerging markets could lead to spill over effects on industrialised markets, at a time when trade tensions are already raising concerns about global growth.
“In particular, as US GDP growth starts to slow, this should see US equities lose momentum and trigger some rotation towards gold.”
High-net worth investors in Asia should be looking to increase their personal holdings of gold according to nearly two-thirds of financial advisors polled in the region by research firm Hubbis on behalf of brokerage INTL FC Stone.
Out of 174 private banks, family offices and wealth management advisers surveyed earlier this year, 62% recommend raising allocations to gold – perhaps to one-tenth or more of a portfolio – while 38% advise against it.
“Gold has sold off over the past few months as US Dollar interest rates have increased,” the South China Morning Post quotes Chris Land, a senior associate in Hong Kong at financial advisory Holborn, “so there is more opportunity to buy.
“For clients who don’t have an allocation of gold in their portfolios, now is time to increase that.”
Returning from Labor Day’s end to the summer vacation season, New York’s S&P500 index closed Tuesday 0.5% below last week’s fresh all-time high.
Asian and European stock markets fell harder today, taking Hong Kong nearly 2.0% lower and Paris down 1.0% with a potential widening of US trade tariffs “still the major factor affecting the markets” according to one equity strategist.
Silver prices also steadied with gold today after falling within 1 cent of $14 per ounce on Tuesday.
That still put the gray metal at its cheapest value relative to gold since spring 1995.