GOLD PRICES held or rose near multi-week highs for most investors outside the US Dollar and Euro on Thursday, as the Bank of England followed the Federal Reserve’s widely expected “no change” decision by raising UK rates off an all-time record low as analysts and traders had forecast.
The Pound fell hard on the UK news, erasing all of this week’s prior 2 cent gain to trade back at $1.3050 on what pundits called profit-taking.
That pushed the UK gold price in Pounds per ounce up towards 2-week highs above £974.
Dollar gold prices held little changed at $1277, slightly higher for the week so far, while Euro priced gold held at €1096.
European stock markets slipped and London’s FTSE100 gave back all of a sharp jump made as the Pound fell on the Bank of England’s 12 noon decision.
“Today’s decision is straightforward,” said BoE governor Mark Carney, presenting today’s decision alongside the Bank’s latest quarterly Inflation Report.
“With unemployment at a 42-year low, inflation above target and [GDP] growth just above its new, lower speed limit, the time has come to ease our foot off the accelerator.”
“A rules-based approach” on the so-called non-accelerating inflation rate of unemployment (Nairu) “would deliver higher rates faster” wrote French investment bank analyst Kit Juckes last month of potential US Federal Reserve chair John Taylor’s academic analysis.
“These aren’t normal times,” said Carney at the Bank of England on Thursday, pointing to the UK’s Brexit vote to leave the European Union as a cause of “uncertainties [now] weighing on domestic activity, which has slowed even as global growth has risen significantly.”
“Inflation is above our 2% target because of the sharp fall in the Pound triggered by the EU referendum,” says the Bank’s Inflation Report.
But even after today’s rate rise, “Debt servicing costs remain historically very low,” say the minutes from the Monetary Policy Committee’s meeting.
Two members dissented, preferring to hold rates at 0.25% and mirroring the previous run of 7-2 decisions against raising rates.
When Bank Rate last stood at 0.5%, back in July 2016, inflation in the official UK consumer-price index was running at 0.6% per year. It came in at a 5-year record of 3.0% for September this year.
So far in 2017 gold priced in Sterling has averaged its highest-ever January-to-October level outside of 2012 at £980 per ounce. 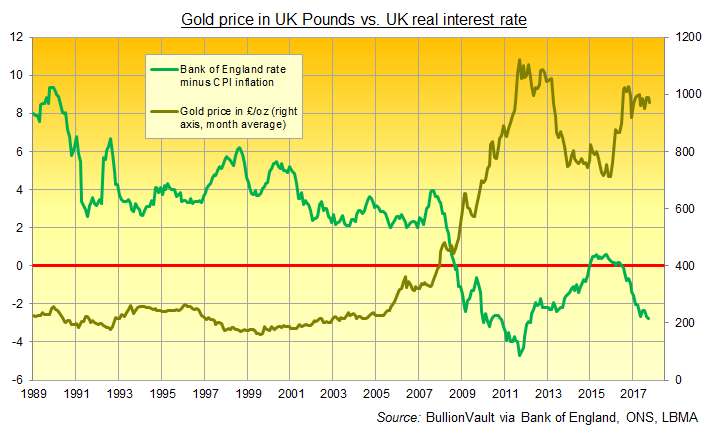 “US interest rates and their expectations have for some time been the single most important driver of gold price fluctuations,” says the new Precious Metals Brief from institutional news-source PAM Insight and specialist analysts Metals Focus.
With Donald Trump expected to name current Fed governor Jerome Powell as his pick for the central bank’s role of chair later today, Wednesday’s “no change” statement from the US central bank was seen “reaffirming the view that a December hike is in their baseline, and it’s in ours as well,” says UK bank Barclay’s chief US economist Michael Gapen, speaking to Bloomberg in New York.
However, the odds of no change or just 1 more rise before October 2018 rose after Wednesday’s Fed decision, reaching 65.4% from 62.0% this time last week according to betting on interest-rate futures.
Today’s UK economic forecasts from the Bank of England project two more interest rate hikes over the next 3 years, taking the cost of short-term borrowing up to 1.0% by late-2020 – some 18 months after the UK is scheduled to leave the EU.