GOLD TRADING in London edged prices higher from a new 2-week low hit against the weakening US Dollar overnight Wednesday in China and Asia, as global stock market extended their recovery from start-July’s Brexit shock lows to 3.5%.
Oil prices eased back but silver held above last week’s closing level, trading at $20.35 per ounce as New York opened for business.
London’s FTSE100 share index has now traded 10% higher already this month, reaching the highest level in almost a year.
German Bund prices continued to slip Wednesday, edging the benchmark 10-year yield up to minus 0.05%, its least negative level since 23 June, the day before the UK’s Brexit referendum result was announced.
US Treasury bonds rallied however, edging 10-year yields down from Tuesday’s 3-week closing high at 1.51% per annum.
Betting on US interest-rate futures now sees zero chance of a hike from the current 0.50% level at the Federal Reserve’s next meeting, on 27 July.
September’s Fed meeting now has a 1-in-8 chance of a hike, the CME’s FedWatch tool shows, with trader positioning putting a 0.1% chance on the US central bank’s key rate reaching 1.00% before March 2017.
The Fed’s own forecasts came into 2016 saying it would reach 1.375% by end-2016.
“Global geopolitical and economic concerns will help keep US interest rates on hold,” writes Jonathan Butler in his latest weekly analysis at Japanese conglomerate Mitsubishi, “and therefore maintain a favourable real rate environment for bullion.”
Short-term however, “Increased risk-on market sentiment…has led gold to come off its recent highs” as money managers trading US gold futures and options trimmed their most bullish position in history.
“We believe there is considerable downside risk for gold if money managers slash long positions or increase short exposure further,” says Butler.
Moreover, some of the 440 tonnes of gold added to ETF trust-fund holdings so far this year “may also not prove to be all that sticky if investor risk appetite increases further.”
Giant ETF the SPDR Gold Trust (NYSEArca:GLD) yesterday saw shareholder liquidation worth 16 tonnes of bullion backing, the sharpest 1-day shrinkage since December 2015’s new 6-year lows in the gold price, immediately after the US Fed finally raised its key interest rate to the current ceiling of 0.50%.
The GLD has still expanded by one-half so far in 2016, adding 322 tonnes of metal – equal to 10% of last year’s record-high global mine output. 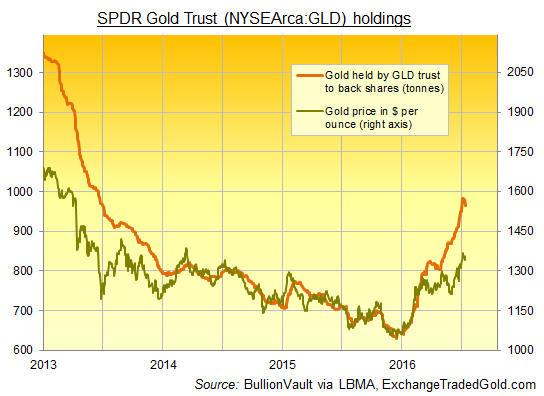 Recovering one-third its 3.5% drop from Monday morning’s new 2-year high of $1375 per ounce, gold held flat Wednesday against most other major currencies as the Dollar slipped on the FX market.
Forex trading in the Yen, however, saw gold prices also recover for Japanese investors, rising back towards yesterday’s new 4-month highs as the ‘safe haven’ currency dropped back.
China’s benchmark gold price hit new July lows in Yuan terms at Wednesday afternoon’s auction in Shanghai, but it held a $2.75 per ounce premium to equivalent Dollar quotes for London settlement.
Shanghai trading in China’s main gold contract held firm, but was again overtaken by the value of trading in silver.
Selling its precious metals trading and London vaulting business to China’s ICBC bank this spring, UK retail and investment bank Barclays apparently quit the officially-regulated LBMA Gold Price benchmarking process on 10 June, according to sources.
With ICBC joining the process last month, that means 13 institutions are now involved at the twice-daily auction says FastMarkets.
Wednesday morning’s “fixing” saw 7 of those banks submit orders to buy and sell, finding a price of $1340 per ounce on volume 10% below the April-June average.