GOLD TRADING jumped to record levels on Wednesday as prices whipped the most since the UK’s Brexit referendum shock after Republican billionaire property tycoon and reality TV star Donald Trump was declared US president elect, defeating Democrat rival Hillary Clinton for the White House.
Jumping $75 at one point to touch $1336 – a 1-week high – gold prices then retreated to whip around $1300 per ounce, a two-year high when first broken ahead of June’s UK vote on quitting the European Union.
Asian stock markets meantime sank up to 5.5% in Japan, with Europe’s largest equities trading over 1.2% down on average by lunchtime in London.
Base metals rallied as the Dollar initially fell hard – but still knocked the Mexican Peso 13% lower – and silver also jumped before the greenback recovered to unchanged versus most major currencies following an acceptance speech from Trump deemed “conciliatory” by newspaper reporters.
Silver prices lagged gold’s 4.4% spike however, peaking 3.9% higher from the level traded as Trump’s victory in key US states became clear, touching $19.00 before retreating 25 cents.
Trading volumes in the Shanghai Gold Exchange’s main gold contract rose almost 5-fold from Tuesday to set a new record equal to 145 tonnes of bullion, breaking the previous Brexit Friday high.
US gold futures trading matched 24 June’s level by 08:06 in New York according to Bloomberg, with 570,000 contracts for 100 ounces each changing hands – notionally representing some 1,700 tonnes of bullion.
Despite the overnight spike in prices, “Gold failed at an important technical level,” says a note for Thomson Reuters Eikon users from specialist analyst Rhona O’Connell at GFMS, “stopping at the downtrend line that dates back to the record highs of 2011.” 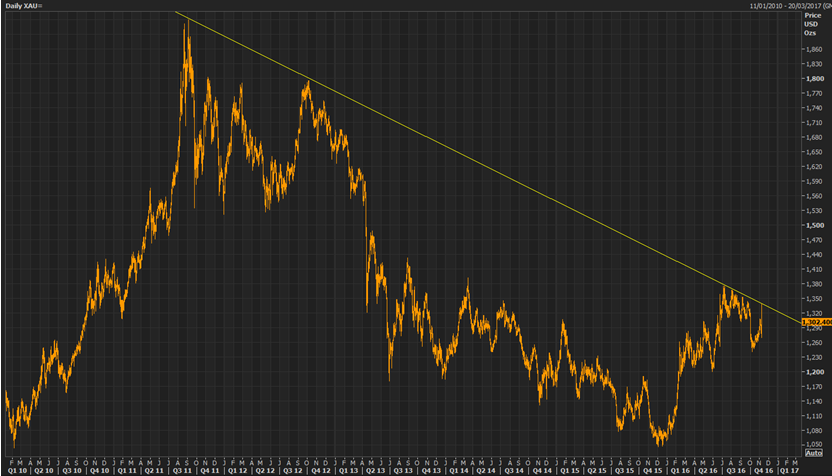 “Longer term the picture…points overall to further bullish [trading] action,” GFMS’ head of metals analysis goes on, “[but] this is more likely to be on the basis of bargain hunting into dips rather than a headlong pursuit of higher prices.”
Looking at US gold investment demand, “A large portion of precious metals investors in the United States tend to also be Republicans,” says O’Connell’s colleague Ross Strachan.
“As such, [Trump’s] win could weigh on safe-haven interest as this would make Republicans feel better about their economic future.
“In addition, Trump has expressed a desire to lower capital gains taxes which could encourage stock market growth at the expense of safe havens including gold.”
Gold bar and coin demand worldwide slid 36% by weight between July and September from the third quarter from Q3 2015 according to the latest Gold Demand Trends from market-development organization the World Gold Council.
Gold jewelry demand has fallen to its lowest level since 2009 this year so far.
“[Trump’s] call for substantial tax cuts could well result in renewed widening of the budget deficit,” notes O’Connell at GFMS.
“While this could also stimulate economic activity…[it] has longer-term inflationary implications, especially when battened onto the fall-out from the ultra-loose monetary policies of recent years – and not just in the United States.”
Betting on US interest-rate futures today cut the chance of the Federal Reserve raising its key rate to 0.75% at next month’s meeting – the last of 2016 – from above 3-in-4 to nearer 2-in-3.
Falling Treasury bond prices, in contrast, drove 10-year T-bond yields up to 1.94% – the highest level since April, and more than 40% greater from the Brexit shock’s new record low of early July.