Despite the bearish sentiment towards the precious metal complex after the sharp decline from USD $1390 per ounce, gold prices have held up relatively well this week, as the market looks toward the all important US non farm payrolls report due out tonight, Sydney time.

Essentially flat for the week, after closing out last week at USD $1294.75 per ounce on the London PM fix, gold tested USD $1280 per ounce but has steadied, mostly due to some short covering, and some position squaring, in the lead up the payrolls report.

In overnight economic news, the ECB surprised no one by keeping interest rates on hold, despite the pressure mounting on them to cut rates and or reintroduce some form of QE.

Whilst they didn’t announce any major moves, ECB president Mario Draghi did allude to the fact that the governing council had discussed the use of quantitative easing and they would ‘continue working on (it) in the coming weeks’.

Meanwhile, in the European economy, service sector activity continued expanding, but at a slower pace. The reading fell from 52.6 to 52.2 in the last month, with Germanys numbers falling too.

In US news overnight, initial jobless claims rose to 326,000, whilst planned job cuts continued to fall, down 30% year on year. US service sector activity expanded at a slightly faster rate, rising to 53.1, with the employment subcomponent rising. The bigger news however, was the unexpected widening of the US trade deficit, which hit $42.3 billion.

The deterioration in the trade deficit was mostly driven by a 1.1% drop in the value of US exports.

Back to precious metals, and in terms of where the market heads from here and it does seem in limbo. Even ANZ stated that they are currently “neutral on gold” and that it was “lacking directional bias”, they did however note that physical buying in Asia had picked up again lately, though it was yet to be reflected in any major Shanghai-London premium.

Whilst there’s a chance that today’s NFP payroll print will prove decisive and alter the tone of the markets, this remains to be seen.

Personally, I still wouldn’t rule out a triple bottom at around the USD $1200 per ounce mark, which would be an encouraging sign, provided it can hold that level.

Again, that would mirror the topping process we saw with the multiple test of USD $1800 per ounce a couple of years back. This would tie in nicely with Jim Rogers comments that gold would make a complicated bottom over some time.

It must be said that asset classes rarely go from being hated to loved straight away, and there can often be a period where they are simply ignored.

A complicated 12 months or so bottoming process for gold could work nicely, with investors focusing on the equity market instead, allowing gold to climb stealthily higher, before eventually coming back onto people’s radars at a later point.

The potential for some further short-term weakness is also highlighted in this chart, showing Mark Hulberts HGNSI (Hulbert Gold Newsletter Sentiment Index). As you can see, sentiment has soured in the past couple of weeks post Crimea and in response to the USD $100 per ounce fall, but it’s not at exhaustion levels yet. 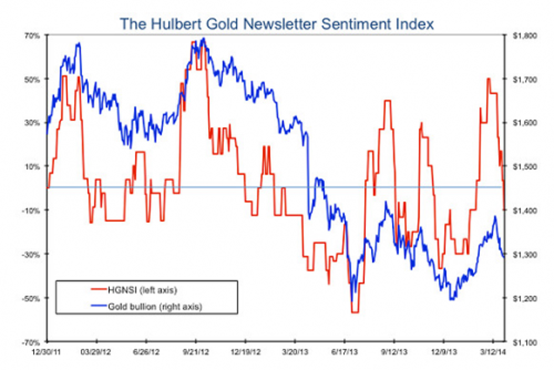 To access the article relating to the chart, you can click here. It’s a well-balanced look at where the market is right now.

Earlier this week I was honored to receive an invitation to attend the World War D conference in Melbourne, which was run by my friends at Port Philip Publishing. http://www.portphillippublishing.com.au

There was a five star line up of speakers and the event was brilliantly run, with Kerry Stevenson, the Managing Director of Symposium doing a typically fantastic job as MC.

Dr Marc Faber opened up the conference with an excellent speech regarding the “terminal phase of a gigantic credit and asset bubble”. The always entertaining Doctor, who didn’t disappoint with some colourful analogies, noted that “‘The US reached a peak in prosperity and influence in the world in the 1950s or 1960s”.

Whilst there are many that would instinctively grasp that, he had some fantastic charts showing the growth in the share of world exports – which has gone to emerging markets over the past few decades, as well as industrial production figures and perhaps most interestingly, oil consumption.

Bottom line, what happens in the US economy is important, but it’s no longer the only game in town.

The ever insightful Jim Rickards, who I had the pleasure of dining with last night, also delivered a fantastic speech about “mutually assured financial destruction”, where he compared the MAD doctrine of nuclear deterrence to the fragile state of the worlds financial system today, which immediately got me thinking of Crimea. One doesn’t need to be a genius like Jim is to know you probably can’t just freeze Russia’s Western assets without them turning off the gas supply to Europe or, upset the China militarily without the risk of them dumping US treasuries for example.

Jim also noted that computer hackers and the like, are capable of things such as shutting down a stock exchange, or at least causing all kinds of damage. The West would lose far more from such an exercise, considering the relative size of Wall Street versus……….whatever the Russian stock exchange is called, which is kind of the point he was making (it’s the MICEX by the way).

Jim also noted that he really loved fine art as an investment, as you can get the maximum value per ounce. As he mentioned, this is obviously not an option for everyday investors, which is where gold and silver come into play.

He also liked certain currencies, including the Canadian dollar, the Korean won and the Singapore dollar. Surprising to some, he also likes the Euro, claiming it’s a de-facto German currency or as he colourfully put it “the euro is the deutschemark in drag”.

On a lighter note, I’m not sure who I’d least like to see in drag, Angela Merkel or Mario Draghi!

On day 2, Greg Canavan gave an excellent talk on the nature of money itself and what money really means, noting that in today’s money system, which is no longer linked to gold, money = credit  = debt. Ultimately when we go to a bank for a loan, what we are really doing is using up our credibility, for its in the belief that we are good for this money (based on our income, assets, jobs, history etc.) that banks will issue loans and from which, economic activity is generated.

I will add a point to Greg’s, in that I think its also safe to say that money = debt = credit can be expanded to include assets as well, as one persons debts are another persons assets.

Therefore, money = debt = credit = assets would be the full equation in my opinion.

Acknowledge this and you understand why our monetary, financial and economic system is so fragile.  Once, or should I say if, credit itself is lost (think of the latin words roots credere – “to believe”), then everything else will potentially fall down around it, and people will realise that the assets they think they own are significantly diminished in value.

Finally, I also really enjoyed Vern Gowdie’s talk on why cash is king, but its reign may be short. His idea of a typically well-balanced portfolio and having 20% in gold made a lot of sense (even though he personally is all cash right now).

Given I’ve spent nearly 20 years in financial advice and superannuation/asset management business, it was fantastic seeing someone whose been at it a lot longer than I, expose some of the less honourable components of the financial services profession. This is an industry that has been booming for decades, as per the latest State of the Nation report which showed that since 1997, the Australian consumer financial services market has grown at ten times the rate of the population.

‘Thank you low interest rates and compulsory super’ says the funds management industry and our banks, although if you scroll to the bottom of that report you’ll notice only a quarter of Australians rate financial planners favourably in terms of their ‘ethics and honesty’!

Bottom line from the conference, at least in my opinion, was to focus on preserving wealth, ensure you keep a healthy allocation to bullion in your portfolio, and perhaps most importantly, invest in yourself, as it’s the only investment you can truly control.

For anyone keen to buy the video from the World War D conference, you can order them from this link (scroll to the bottom) http://pro.portphillippublishing.com.au/p11worlddvdmp3/W920Q401/?h=true

Like many of its banking counterparts, UBS is hardly bullish in terms of where they see gold prices going. Alongside Goldman Sachs, HSBC,
Macquarie, Credit Suisse and Soc-Gen all issued ever more dire predictions for the gold price toward the end of 2013; UBS is firmly in the bear camp for now.

Despite that, they have warmed to gold’s role in a well-balanced portfolio, stating in a recent note that “while gold seems stuck in a range at the moment, the metal remains negatively correlated with risk”, before going on to say that “while the metal has been difficult to trade from a tactical standpoint; strategically its performing well as a portfolio diversifier.”

This ties in well with the views shared at the World War D conference, where most of the speakers agreed gold should remain part of a well-balanced portfolio.

For those interested in the article quoting UBS, click here. It also includes some excellent commentary from Marc Faber and Dylan Grice.