GOLD TRADING in London’s wholesale market saw prices slip against a rallying Dollar on Thursday as new data said US jobs growth blew past analyst forecasts in May.
Wholesale bars traded down to $1262 per ounce – $10 below yesterday’s new 5-week highs – as world stockmarkets edged higher but US Treasury bonds fell, pushing up longer-term interest rates, after the private-sector estimate from payroll services provider ADP put May’s net jobs growth at 253,000 against average predictions of 185,000.
Friday will bring the US government’s estimate, currently expected to show lower growth from April.
The Chinese Yuan had earlier spiked on the FX market, trading up to its highest against the Dollar since Donald Trump won the US presidency last November on what some commentators called “meddling” by the Beijing authorities after new Chinese manufacturing data came in weaker than expected, with managers reporting a fall in activity overall on the Caixin PMI survey.
That buoyed Shanghai gold up to the equivalent of $1275 per ounce despite a drop in the official Yuan-denominated benchmark price, maintaining an $8 premium over comparable London quotes – just below the last 12-months’ average incentive to new imports into the world’s No.1 gold consumer nation.
“Some light real money buying accrued around the $1260 mark” earlier this week, says the dealing desk at Swiss refiners and finance group MKS, referring to cash-funded investment managers not trading on margin.
“Resistance for gold sits initially at [this week’s 1-month] high at $1270…followed by a significant downtrend line dating back to the all-time highs in 2011 at $1272.”
Amongst gold-backed investment trusts, New York’s giant gold ETF – the SPDR Gold Trust (NYSEArca:GLD) – yesterday held unchanged in size for the sixth day running, needing 847 tonnes of bullion to back its shares in issue, equal to some 24% of 1 year’s global mine output.
The giant iShares Silver Trust (NYSEArca:SLV) also ended the day unchanged in size once again, needing 10,605 tonnes of bullion backing – equal to some 38% of a global annual mine output.
“Minimum volatility = Maximum complacency,” says French investment bank Societe Generale’s strategist Albert Edwards, noting that “the last time volatility in the US bond market was this low (and complacency this high), 10-year yields spiked up some 150bp in only four months as part of Bernanke’s ‘Taper Tantrum’.
“[Now] it is worth bearing in mind, as the Fed continues to hike [interest] rates, that 10 of the 13 post-war tightening cycles have ended in recession.”
“We believe that many [equity] market participants today are too relaxed,” agrees a new strategy note from giant US bond-fund management group Pimco, saying that “medium-term risks are building and that investors should consider using cyclical rallies to build cash to deploy when markets eventually correct – and possibly overshoot.”
Demand to buy at Thursday morning’s LBMA Gold Price auction in London was light at an opening suggestion above $1267, with a balance found between buyers and sellers $1 lower.
Gold trading volumes at London’s twice-daily benchmark rose on average in May from April’s plunge, data said today from independent administrators IBA, part of derivatives trading exchange ICE. 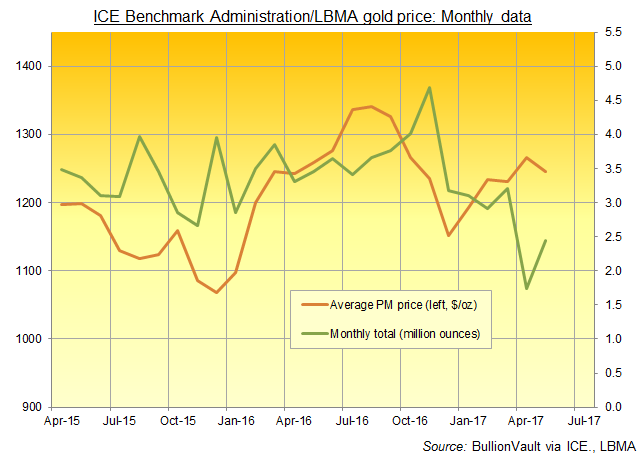 Now regulated in UK law, the benchmark was “hit by volatility” in mid-April after 4 of the 14 direct participants stood aside from the process, a Reuters report claimed last week, because they weren’t ready for new exchange-traded contracts imposed on the auction by ICE in a race to beat competitor exchanges in launching gold futures trading in London.
London’s benchmark trading volumes remained almost 29% smaller last month from the previous 2-year average, starting when the new process replaced the century-old London Gold Fixing.
The Shanghai Gold Exchange’s price benchmarking reported a 20% drop in its average daily trading volumes for April compared to March.
This spring’s drop in gold trading volumes at the twice-daily London benchmark stands in contrast to total volumes through the world’s central hub, with the major bullion banks yesterday reporting a continued uptrend in activity this April.