GOLD PRICES jumped above $1265 per ounce in London trade Friday, gaining 0.9% for the week as world stock markets slipped despite another fresh overnight record-high in US equity indices.
Major government bond prices rose, pushing interest rates down, and crude oil extended its slump from Tuesday’s 1-month highs despite the Opec producers’ cartel agreeing to curb output until 2018.
Alongside gold prices, silver and platinum prices also traded at their highest Dollar level since late April, both gaining 2.3% for the week.
Thanks to rising prices for so-called “junk” bonds, the dividend yield offered by European stock markets has now risen above the supposed “high yield” offered by bonds rated below investment grade, says a note from Bank of America Merrill-Lynch.
More than doubling inside a month, the price of crypto-currency Bitcoin meantime fell sharply on Friday, retreating 10% from yesterday’s fresh alll-time high of $2779.
Over-the-counter fund the Bitcoin Investment Trust (OTCMKTS:GBTC) closed yesterday at a 103% premium to the NAV of the BTC it holds.
“Could be a burst of excitement if gold breaches that [6-year] trendline at $1280-ish,” says commodities and FX trader Sean Corrigan.
“Still very much a medium/long-term range, though” 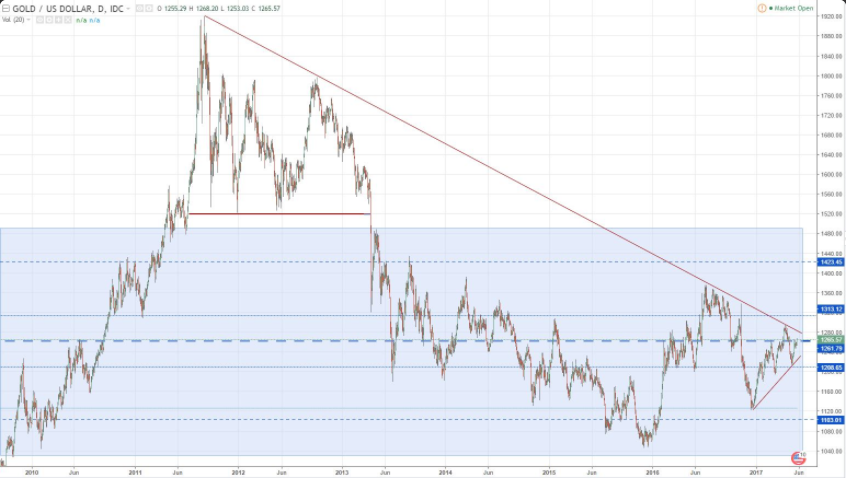 Technical analysis from both French bank Societe Generale and Canada’s Scotiabank today put short-term suppot at $1245 because it represents last week’s late low and also the 200-day moving average of Dollar gold prices respectively.
The Euro on Friday erased the last of this week’s 0.8% rise to new post-Trump highs against the Dollar, buoying the gold price for German, French and Italian investors near 3-week highs at €1131 per ounce.
Gold priced in British Pounds meantime jumped over 2.3% for the week to hit fresh 1-month highs above £983 per ounce as Sterling extended yesterday’s sharp drop on the FX market following weaker-than-expected UK GDP data.
The Chinese Yuan in contrast pushed higher to early February highs against the Dollar after Beijing’s State Administrator of Foreign Exchange named 5 individuals and 5 companies as “major violators” of controls to block the buying and selling of foreign currency.
Gold prices rose faster however, taking the Shanghai Gold Fix back to last Friday’s level of ¥279 per gram, with a Dollar-equivalent premium over London quotes of $9.60 per ounce – right in line with the daily benchmark’s average incentive for new imports into the world’s No.1 gold mining, importing, central-bank buying and private consumer market.
New data yesterday said gold imports to China through Hong Kong – formerly the only conduit for bullion shipments – fell hard in April from March, but held virtually unchanged on a rolling 12-month basis from this time last year at 794 tonnes.
“I think high prices hurt gold imports,” Reuters quoted Ronald Leung at at Lee Cheong Gold Dealers, “[especially as] March imports were already too much.”
“Physical gold demand in the core demand countries has remained very robust of late,” says a note from Germany’s Commerzbank.
“Nonetheless, there are growing doubts on the market that India will maintain this high import level throughout the year.”
Next week brings the final meeting of India’s Goods and Service Tax (GST) Committee regarding gold taxation – “the most significant reform…since the economy was liberalised 26 years ago,” according to specialist analysts Metals Focus.
“At present, gold imports in India attract a 10% import duty, 1% VAT and a 1% excise duty,” it explains in its latest India Focus Monthly.
“In the GST regime, we urge and expect that the total tax burden on gold be halved from the current level of around 12%,” says the mining-backed World Gold Council’s managing director for India, Somasundaram PR, speaking to The Business Standard today.