Gold prices briefly broke below USD $1300 per ounce overnight, as headline data beats in the US added to the downside pressures that have come to bear on the yellow metal in the past several trading days.

Currently sitting at USD $1305 per ounce, with silver having broken below USD $20 per ounce, the precious metal complex is having a very weak end to what had other wise been an outstanding Q1 2014.

Indeed, with prices expected to remain under pressure in the coming days, the market is looking much like it did in Q3 2013, where a July & August rally was followed by a sharp sell-off in September, which lasted into into Q4 of last year, where gold looked to have bottomed just below USD $1,200 per ounce.

With that in mind, a potential triple bottom in gold can’t be ruled out. Were this to occur by the end of the Q2 this year, and were it to successfully hold the USD $1,180 – $1,200 per ounce range, it would mark a roughly 1 year bottoming process for gold, which would tie in with the topping process in 2011 and 2012. 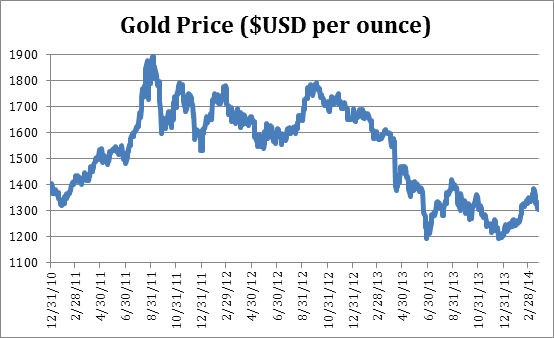 A bottoming process that follows a similar path would have a re-test of the USD $1,200 per ounce range coming into play in late Q2 this year.

You could be sure that such a bottom would be met with universal bearishness towards the metals, as the last two month rally was predominantly a result of a halt of ETF outflows, and an unwinding of record speculative short positions, rather than any major bullish tone returning to the sector.

As it stands today, gold is up 8% for the year, whilst silver is up just 2.4%, wiping out nearly all the gains investors were sitting on by the end of last month, when the metal was fetching over USD $22 per ounce.

To some extent, this pullback should have been expected, as the market had run very fast in the past couple of months, and post the Crimea referendum, some weakness was to be expected, a scenario we discussed in a blog on the 17th March when we stated;

“gold bulls should keep in mind that we’ve had near on 3 months of uninterrupted price gains here. A pullback shouldn’t be unexpected, and an easing of tensions over Crimea could be a catalyst.”

For now, the tone of the sector has changed, and the path of least resistance for the metals will be lower. It will be very interesting to see if gold can hold the USD $1,300 per ounce mark as we head into the weekend, with final GDP results due in the US, alongside home sales, personal consumption expenditures, consumer sentiment figures and a range of Fed speakers.

US data releases overnight were dominated by durable goods, service sector activity and mortgage applications, the latter of which fell for a fifth week in seven, dropping by 3.5%, driven by a 7.7% fall in refinancing activity.

US services data was stronger though, with the Markit Flash PMI printing at 55.5, ahead of the 53.3 print for February and of expectations of a rise to 54.0. It wasn’t’ all good news though, with the headline attending the release stating that “new business rises at slowest pace for 16 months”

The employment sub-component was unchanged too, with business expectations being the standout, with a stronger degree of optimism on show.

On the durable goods front, whilst the headline print was much stronger than expectations, the ex-transports number (which most people pay more attention too) was much weaker, missing expectations of a 0.3% rise  and coming in at only 0.2%. Commenting on the release, Westpac stated; (bolded are mine)

“US durable goods orders rose 2.2% in Feb on the back of a 14% rise in defence orders, a 3.6% recovery in autos and a 14% rise in civil aircraft. Although core capital goods orders fell 1.3% in February and half of the January rise was revised away. This component has fallen in four of the past six months to be down 2% annualised. This points to a significant loss of momentum in the business investment story at a time when the economy was reported to have accelerated.”

Zerohedge also carried a decent article on the release, with some not to be missed graphs, which can be viewed here. Suffice to say, there is no evidence of a strong and sustainable US economic recovery.

•    Hedging EM risks? Think gold
•    Can gold replace bonds in balancing equity risk
•    A perspective on gold as a hedge in an expanding financial system

Hard to disagree with the foreword from Marcus Grubb, Managing Director, Investment Strategy for the WGC, who stated that; “ The report finds that by complementing a likely smaller bond allocation over the coming years, gold can improve portfolio diversification and reduce tail risks.”

Some other interesting statistics and observations included the fact that over 70% of physical global gold demand has come from emerging markets in the past 5 years, with India and obviously China leading the way.

That helps explain why I often like to describe gold as not only a way to protect yourself against the secular decline of what we might call Western Developed Market economies but also participate in the growing wealth and rising prosperity of emerging markets.

When talking about whether gold can replace bonds in balancing equity risk (page 16..17), one of the points to notice was that 0.6% per annum was the real return a bond investor may hope to yield in the next 10 years, hardly attractive in the face of continued QE and potentially higher inflation, and much lower than the 1.8% that has been the long term average.

Chart 2 in this section is also worth a quick look, as it shows the increase in optimal gold allocations that are the natural result of a reduction in expected gold returns.

Finally, a perspective on gold as hedge in an expanding financial system, contains some useful information, starting with the introduction, which hits the nail on the head, stating that;

“While financial assets have grown at an unprecedented pace, gold holdings remain low, depriving investors of the portfolio benefits it can offer. The share of gold in portfolios can sustainably increase and provide balance to a global financial system likely to experience more frequent tail events.”
One of the comments worth nothing was on page 25..26 where they state that;
“the lack of a physical backing, coupled with a boom in financial innovation, has allowed financial assets to grow 10-fold over the past 20 years – well in excess of a three-fold increase in nominal gross domestic product (GDP) over the period.”
Chart 1 on page 26..27 sums up nicely the incredible growth in financial assets (predominantly debt, but also equity) relative to GDP since the 1980’s.

In simple terms, imagine the entire economy was just one stock. Lets call the stock GDP.

If GDP’s sales and output were growing at an average rate of 3%, then it defies logic its share price could perpetually rise at 10% per annum for ever, as this would imply the value of the company is compounding at three times the actual output of the company.

The unsustainability of the current economic system, the increasing likelihood of tail risk events, and their ability to cause large losses for investors is captured neatly in chart 6 on page 30..31, which shows that the number and magnitude of tail risk events has grown in each decade since 1980.

This is unsurprising considering the nature of the system as it stands, and more of the same will only make the problems worse, adding to the importance of physical gold ownership.

The entire article can be viewed here, though you may need a login from the WGC, which you can set up for free I believe.