GOLD PRICES gave back a $5 rally from new 2018 lows in London trade Wednesday lunchtime, falling back to $1255 as the US Dollar pushed higher once more on the currency market following better than expected US trade data.
Despite worsening ‘trade war’ tensions between the US and China, world stock markets rallied from this week’s sharp fall to date, while longer-term interest rates fell on a rise in longer-term government bond prices.
The yield offered by 10-year US Treasury debt slipped to 2.83% – its lowest since the end of May.
Two-year bonds fell in price however, pushing their yield higher and cutting the spread between long and short-term US rates to the narrowest since August 2007 – eve of the global banking crisis – at just 33 basis points.
Pulling that spread below zero, the US yield curve has inverted – with expectations for future interest rates falling below near-term rates – just before each of the last five US recessions. 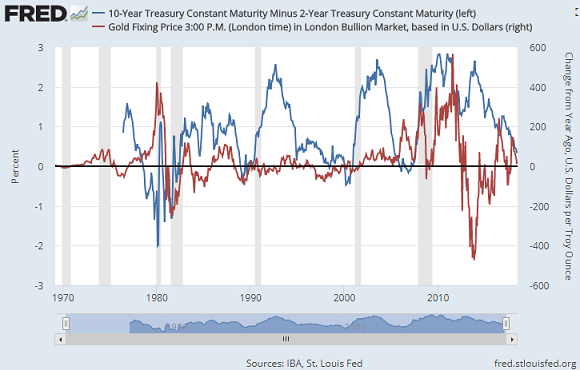 New data today put the US trade deficit in goods at $64.9 billion in May, the smallest gap between the value of US physical exports and imports since August on a seasonally-adjusted basis.
A group of Republican senators said overnight they will try to stem US President Donald Trump’s new import tariffs and blocks on Chinese investment.
Unconfirmed reports from China say that President Xi Jinping has ordered the politburo to prepare for “all-out trade war”.
Meeting today with US Defense Secretary Jim Mattis, China is committed to peace but “cannot give up even an inch of territory” said Xi, apparently referring to Taiwan as well as disputed islands in the South China Sea.
Over the last 2 weeks the Yuan has now lost more than 3% versus the Dollar, its sharpest drop since the devaluation of mid-2015.
“Moderate depreciation is reasonable,” said the state-run Securities Daily newspaper today.
“It can leave some room for China to respond to the trade situation, so it’s not a bad thing.”
But “the speed the Yuan fell earlier today was obviously considered too fast from the authorities’ point of view,” says one Shanghai bank’s head of currency trading, quoted by the Wall Street Journal.
With the weak Yuan cutting domestic Chinese gold prices in Dollar terms, the premium for metal delivered in Shanghai rather than London dropped as low as $2-3 per ounce, says a note from Swiss refiners MKS.
That drop “prompted decent selling action” in China’s domestic bullion market.
“If we see higher trade tension, that could at some point be positive for gold,” says private Swiss bank Pictet’s wealth management FX strategist Luc Luyet.
“Given the recent equity-market correction and talk of a trade-driven slowdown in the global economy,” agrees Canadian brokerage TD Securities’ analyst Bart Melek, the US Fed is unlikely to press ahead with any aggressive interest rate hikes.
Gold prices “may do better” soon, Melek thinks.
But for now, “it appears that gold is being treated currently as part of the commodity complex” rather than a ‘safe haven’, Bloomberg quotes National Australia Bank economist John Sharma.
Gold’s failure to jump as world stock markets fell at the start of this week “has prompted stale longs to exit their positions,” says brokerage INTL FCStone in a note.
Looking at technical gold price charts, “Gold appears poised to target the Dec 2017 low,” says the New York office of bullion bank Scotia Mocatta, pointing to the $1236 level.