GOLD PRICES edged lower on Monday morning in London, while the Dollar reduced earlier losses but world stockmarkets fell hard ahead of tonight’s US presidential debate between the Democrats’ Hillary Clinton and Republican candidate Donald Trump, writes Steffen Grosshauser at BullionVault.
Shares in Deutsche Bank touched new quarter-century lows after a weekend magazine report that Berlin’s Chancellor Merkel has ruled out any rescue for the German financial giant, now facing a $14 billion fine from US regulators.
Former IMF and now Harvard economist Kenneth Rogoff meantime warned that slowing Chinese growth poses the greatest threat to global financial stability.
Slipping from Friday’s close of $1337 per ounce after its biggest weekly gain in two months, gold prices traded in an $8 range, but were still set for a third quarterly advance in succession – the longest rally since 2011 when prices reached a record high of $1900 per ounce. 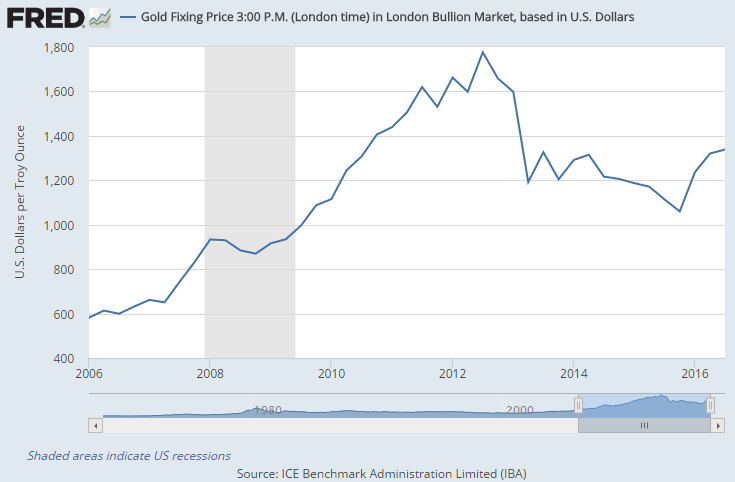 The first of three televised debates between US presidential contenders Trump and Clinton will take place on Monday evening local time and could be one of the most-watched events in US TV history.
“If Trump is perceived to have an improved probability of winning the Presidential race, that is likely to be supportive of gold prices,” says a note from National Australia Bank’s analyst Vyanne Lai.
“Generally Trump’s presidential candidacy is associated with more extreme policy measures and more volatility in the geopolitical landscapes.”
“Polls have started to tighten ahead of the US presidential election,” says US financial giant Citigroup, forecasting a rise to $1425 per ounce should Trump win.
Meantime Monday, “we expect gold to continue to hold its recent $1330-1340 range in the lead up to the presidential debate,” said Swiss refiner MKS Pamp overnight in Asian trade.
Silver tracked gold prices, extending the loss to 0.8% to $19.45 after it already lost almost 1% on Friday.
Both platinum and palladium also fell around 1%. Base metals also dropped 0.5% on average.
European and Asian shares fell hard as Deutsche Bank sank, but crude oil rebounded 0.6% to around $47 per barrel as major oil producers in the Opec cartel met in Algiers to discuss output reductions.