GOLD PRICES fell $10 per ounce against a resurgent US Dollar on Tuesday in London, erasing this week’s earlier gain as world stock market sank for a third session running.
Solid gold trading in Shanghai – where the Chinese stock market today sank over 3% – saw global quotes rise to $1345, with Tuesday’s benchmark price in the No.1 consumer nation edging higher in Yuan terms.
Barely a week before the key Lunar New Year holiday gifting and shopping season, that held Shanghai gold at an $8 premium to London prices, just below the typical incentive for new imports.
Gold prices held firm in other currencies except the Japanese Yen, which also rose on the FX market as the Dollar jumped to 2-week highs versus the Euro and Sterling.
The UK gold price in Pounds per ounce held near 3-week highs above £965, while gold priced in Canadian Dollars spiked to its highest since June 2017.
With New York’s Dow Jones index recording its heaviest-ever points drop on Monday, the global stockmarket plunge had already pulled the MSCI World Index down 6.2% from its new all-time peak of late January.
Tokyo today lost over 4.4% as Hong Kong lost 5.1%, while European equities traded another 2.7% lower by early afternoon.
“[The slump has] encouraged some small safe haven buying in gold and the Yen,” says a trading note from David Govett at brokers Marex Spectron in London.
But for stocks, “I think this is a healthy, albeit rather vicious correction,” he adds.
“[So] I don’t think gold will go a lot higher and if the stock market does recover, the Dollar may well do the same, at which point gold comes lower again.”
“For [equity] investors with a long time horizon and robust portfolios,” agrees Alex Scott, chief strategist at UK investment managers 7IM, “periods such as this offer opportunity.
“It would be extremely unusual to see a sustained or deep equity bear market against such a positive economic background.”
With the US stock market ending January with its longest run of unbroken monthly gains since 1958, new data today said US gold investment demand sank to a 10-year low in 2017.
Globally, say the figures from mining-backed market development organization the World Gold Council, private-investor demand for gold coins and bars fell to its weakest since the financial-crisis recession of 2009. 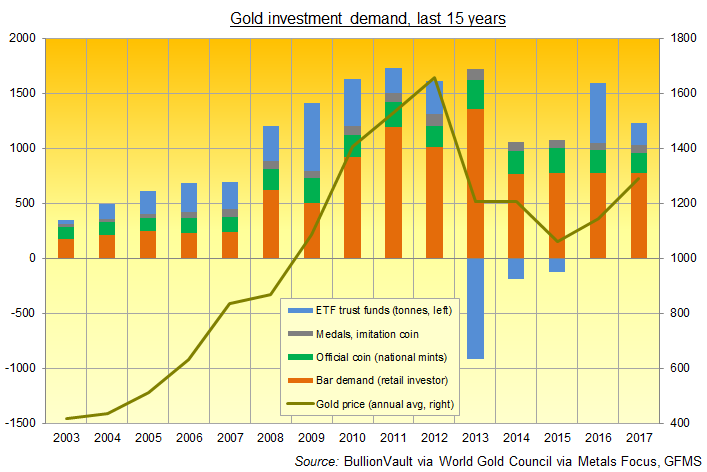 “The [gold investment] market is not in bad shape…given the backdrop of monetary policy tightening and strong equity markets in 2017,” says the WGC’s head of market intelligence Alistair Hewitt.
“Institutional investors, especially in Europe, continued to add gold to their portfolios as a hedge against frothy asset prices and geopolitical uncertainty.”
So-called crypto-currency and stellar 2017 asset Bitcoin today rallied almost 17% after sinking to new 3-month lows beneath $6000, down some 70% from its peak of mid-December.
The US Congress today hears testimony from financial regulators on how they’d like to treat so-called “digital assets” such as Bitcoin, Ethereum (down 40% after tripling in December) and Ripple (halving in the last week).
Commodity prices meantime fell further on Tuesday but major government bond prices rallied once more after New Year 2018’s sharp sell-off.
As that pulled down longer-term interest rates, betting that the US Federal Reserve – now under new chair Jerome Powell – will raise its overnight rate at next month’s policy meeting fell, retreating from a 76.1% likelihood to just 69.0% on Tuesday according to data from the CME futures exchange.