GOLD PRICES fell $5 per ounce from the $1200 level in London trade on Wednesday, slipping ahead of the US Federal Reserve’s September decision, widely expected to take its key interest rate up to a ceiling of 2.25%.
Priced in the single Euro currency gold slipped within €3 per ounce of early September’s 32-month low at €1015 ahead of the Fed decision.
The UK gold price in Pounds per ounce fell harder, down to its lowest level since June 2016’s shock Brexit referendum result at £907 per ounce, after the opposition Labour Party voted at its annual conference to “keep all options on the table” regarding Britain’s exit from the European Union next March – including a so-called “people’s vote” on whether or not to remain after all.
China’s stock market bounced, recovering most of Tuesday’s drop, but other exchanges held flat overall ahead of the Fed decision as major government bond yields edged lower.
Adjusted for market-implied expectations for inflation, the real rate of interest offered by 10-year US Treasury bonds has doubled so far in 2018 to reach a 7-year high just below 1.0% per annum.
Gold prices have retreated by almost one-tenth in US Dollar terms. 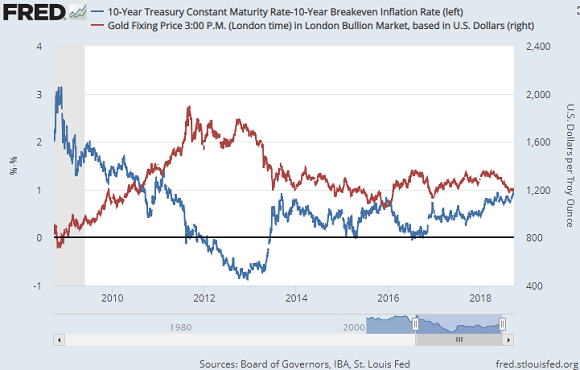 The Federal Reserve’s balancesheet has meantime shrunk by 5% to a near 5-year low as it stops re-investing money from matured US Treasury bonds back into new QE purchases.
“There is a growing consensus for further gradual tightening given the strong incoming data we have seen,” reckons US brokerage Wells Fargo Securities’ senior economist Sam Bullard.
“[But] we see risks tilted dovish going into the meeting,” counters US bank Citi’s economist Andrew Hollenhorst, looking at recent changes in the “dot plot” forecasts of Fed voting members.
Reputed to be more dove than hawk on rates, new vice-chair Richard Clarida will today replace the vote of former New York Fed chief Bill Dudley, now succeeded by former San Fran Fed boss John
Wednesday’s announcement may also cut the Fed’s promise about “remaining accommodative” says Citi’s Hollenhorst, suggesting that interest rates won’t help stimulate the economy after today’s rise and so signalling that the rate-raising starting at end-2015 is nearly done.
In contrast to that view, almost half of all speculative betting on September 2019’s Fed decision now sees 4 or more interest-rate hikes coming over the next 12 months, according to data from the CME derivatives exchange.
That figure of 49.1% has jumped from 22.9% this time in August.
After today’s Fed rate rise, “inflation-adjusted Fed rates will be in positive territory for the first time since 2008 – not an especially positive thing for gold,” says a note from Japanese conglomerate Mitsubishi’s strategist Jonathan Butler.
“In addition, a growing chorus of hawkish voices even from previously notable doves such as Governor Lael Brainard may result in the Fed revising its guidance towards more interest rate hikes in the next 1-2 years, with revised upwards expectations on inflation and growth.”
Looking at futures market positions however, “There is still plenty of room for further short covering” in platinum,” says Butler, noting that a reduction in bearish bets “helped lift platinum prices last week”.
Platinum today edged back to $826 per ounce, some $2 down for the week so far.
Silver in contrast held above last Friday’s finish, trading at $14.42 after jumping to new highs for September on Tuesday, up 1.8% to touch $14.56 per ounce.
Latest data from US regulators the CFTC say hedge funds and other speculative traders in Comex silver futures and options cut their heavily bearish betting for a second time running last week, but kept it near series-record highs equal to 7,007 tonnes of metal.