GOLD PRICES retreated 0.6% from yesterday’s 1-month high against the Dollar on Wednesday as world stock markets bounced and UK Brexit vote campaigning rolled on ahead of the US Fed’s long-awaited June announcement on interest rates.
Silver held at $17.40 per ounce as European stock markets including London gained 1% from Tuesday’s new 4-month lows.
Major government bond prices eased lower, nudging debt yields higher from multi-year and record all-time lows.
Gold prices slipped to $1281 per ounce and retreated to £900 for UK investors, down 1% from yesterday’s near 3-year high, as the Pound recovered almost 1.5 cents on the currency market following news of the lowest UK jobless rate in over a decade.
Key to Wednesday’s updated economic forecasts from the US central bank will be “how many of the Fed policy makers [are still] expecting two rate hikes this year,” says David Govett at brokerage Marex Spectron in London
“If the tone of the press conference is dovish,” he goes on, “I would look for gold prices to break $1300 and hold above it, with a view to making new highs on the year. If hawkish, we will probably see a bout of long liquidation with prices falling back towards $1270.”
Betting on Fed Funds interest-rate futures now puts the odds of a June hike to 0.75% at less than 1-in-50, down from almost 1-in-3 this time last month.
Odds that the Fed will set its key rate at 0.75% in July’s meeting have more than halved to 1-in-5 according to the CME Group’s FedWatch tool.
Following weak inflation data from the UK meantime, betting on UK interest rates now says the Bank of England will stick at its current record-low of 0.5% – first reached in early 2009 – until 2020.
That would extend the longest stretch of unchanged rates since the Bank of England’s then-record low of 2.0% between 1931 and 1951 was punctuated by a brief hike to 4.0% at the outbreak of World War II. 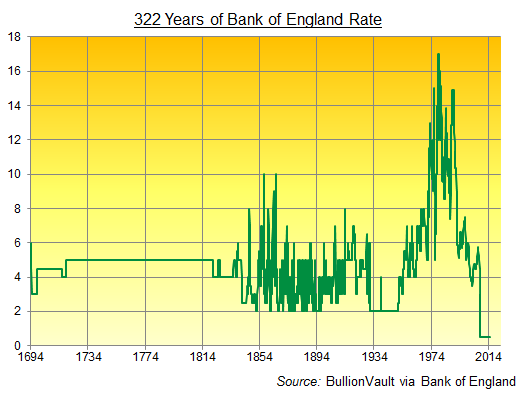 With the Bank of England due to announce its latest policy on Thursday – 1 week before the UK referendum on leaving the European Union – finance minister George Osborne today said he would have to announce an emergency budget, cutting spending and raising taxes, if the nation votes for Brexit on June 23rd.
After opinion polls yesterday showed a swing in favor of Brexit, “Betting odds [from bookmakers] which put the probability of a Remain win above 80% now place it at some 60%,” says The Economist magazine online.
Campaigning on Wednesday saw a flotilla of 35 trawlers sail up the Thames in London towards the Houses of Parliament, joined by UKIP leader Nigel Farage under the banner “Fishing for Leave”.
Former pop-star and knighted charity campaigner Bob Geldof appeared on a boat covered with “In” banners, reportedly blasting the Brexit boats with songs from a PA system including Chicago’s “If you leave me now”.
“Now seems the appropriate time to start panicking,” says Chinese-owned ICBC Standard Bank’s FX strategist Steven Barrow of the shift in Brexit opinion polls.
“In addition, outside events like the shootings in Orlando and violence at the Euro football championships all play into the hands of the anti-migration psyche that underlies the Brexit campaign.”
Investment professionals polled by the Financial Times‘s FTAdviser magazine “[are] divided” over both the likely outcome of the referendum and its impact on the markets.
“Equal numbers of advisers thought the UK stockmarket and Sterling would be winners in the event of a vote to remain, while the same number of people (29%) believed it is time to take risk off the table and go for gold as a hedge in the event of a vote to leave.”
“Of all the precious metals,” note commodities analysts at German financial services group Commerzbank, “it is only really gold that is profiting from the current market situation.”
Continued central-bank gold  buying by Russia and China, as well as the recent cash-raising sales by crisis-torn Venezuela, prove the metal’s appeal as a ‘safe haven’ asset according to both Societe Generale and Thomson Reuters GFMS this week.