GOLD PRICES edged higher but held sharply below yesterday’s multi-year highs on Friday, as world stock markets extended an overnight rally and major government bonds eased back amid a suspension of campaigning in the UK Brexit referendum on quitting the European Union.
Ending the week 1.3% higher in US Dollar terms at $1280 per ounce, gold traded over 3.5% below Thursday’s 3-year high against the British Pound.
Shanghai gold prices ended the week 1.7% below Thursday’s 3-year high on near-record volumes, fixing with a premium to global spot quotes of $2.80 per ounce on Friday afternoon.
With UK campaigning for next week’s Brexit referendum suspended after Thursday’s murder of pro-Remain opposition MP Jo Cox, the International Monetary Fund’s managing director Christine Lagarde told an audience in Vienna, Austria that membership of the EU has helped make Britain a “dynamic and vibrant economy.”
News of the murder and suspension coincided Thursday with a sharp reversal across financial markets, as New York stock markets rallied, bond prices eased back and gold dropped almost $40 per ounce from the day’s earlier 2-year high.
“Profit taking and a pullback in the US Dollar saw gold dive sharply,” says one trading desk.
“Good selling flows out from both Asia and Europe on the earlier rallies.”
“There was a complete shift in sentiment among market participants in the late afternoon,” says Eugen Weinberg’s team of commodities analysts at German financial services group Commerzbank.
“Gold responded by shedding all of its gains again, and actually closed trading around 1% down.”
“A shooting star formation on the candlestick chart indicates a possible bearish reversal,” says Russell Browne in his daily technical analysis for Canada-based bullion bank Scotia Mocatta.
“Short-term,” agrees gold market-maker Societe Generale’s technician Stephanie Aymes, “gold has formed a Shooting Star…[and] the candle also engulfs previous two days of price action.
That “indicates profit taking in near term and defines resistance at $1300, the previous opens/closes,” Aymes goes on, highlighting what she calls “some red flags for continuation of short-term uptrend.”
“In contrast to consensus,” says the Commodities Weekly from Chinese-owned investment and bullion bank ICBC Standard Bank, “we think gold might suffer in the short term in the event of a Leave result,” pointing to a likely rise in the US Dollar, plus falling oil prices, driving real inflation-adjusted bond yields higher.
Moreover, “in previous episodes of severe financial market stress gold has been positively correlated with other assets, at least for a short time, as liquidity dries up, spreads widen and margin calls proliferate.”
Already highly volatile over spring and summer 2008, gold jumped 23% against the Dollar within 2 weeks of Lehman Brothers collapsing in September that year, but then sank to new 12-month lows over the following month, losing more than one-fifth of its value as world credit markets froze and equities dropped. 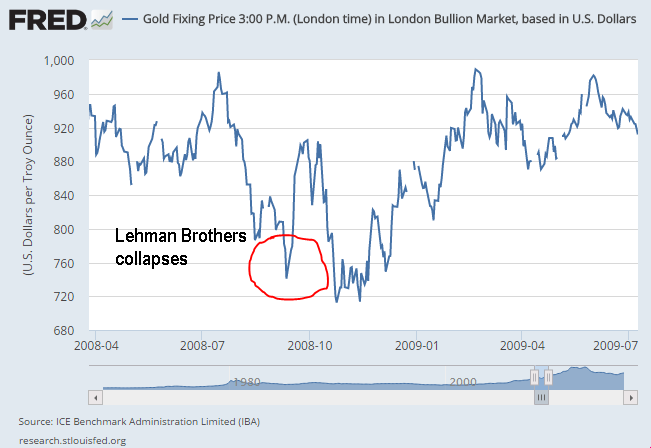 A crisis-led drop on a Brexit vote, says ICBC Standard, would be “short-lived but potentially sharp – the [speculative] market is currently heavily biased to the long side.”
Further ahead, gold’s 2016 rally to date has lasted longer than previous pullbacks since the top of summer 2011, says Aymes at SocGen, “giving credence to sustainability of rising trend.
“The pattern clearly indicates signs of a long-term bullish reversal after an elongated downtrend of 5 years.”