GOLD PRICES sank to new 10-month Dollar lows Thursday as the US currency surged and Asian stock markets followed Wall Street lower after the Federal Reserve raised its key interest rate for the second time in 12 months.
With the gold price losing $35 per ounce to $1126 between the Fed announcement and lunchtime today in London, analysts claimed the rate rise “was priced in” but gold’s drop reflected shock at the Fed’s outlook for more rate hikes in 2017.
Commodities meantime fell over 1%, with US crude oil falling back near $50 per barrel, as government bond prices fell everywhere, pushing longer-term interest rates higher.
Giant gold-backed investment fund the SPDR Gold Trust (NYSEArca:GLD) shrank Wednesday by the equivalent of almost one day’s entire global gold-mining output, retreating as shareholders liquidated to the smallest size since mid-May at 849 tonnes.
Shedding 12 days-worth of global mine output over the 5 weeks since Donald Trump’s victory in the US election, the GLD has now gone 25 trading days without any inflows, the longest stretch since the Fed’s first rate-hike from zero after 7 years in December 2015.
Gold prices then touched $1045, the lowest since early 2010, before jumping 14% by the end of January this year and rising again to $1375 in the aftermath of the UK’s Brexit referendum of late June. 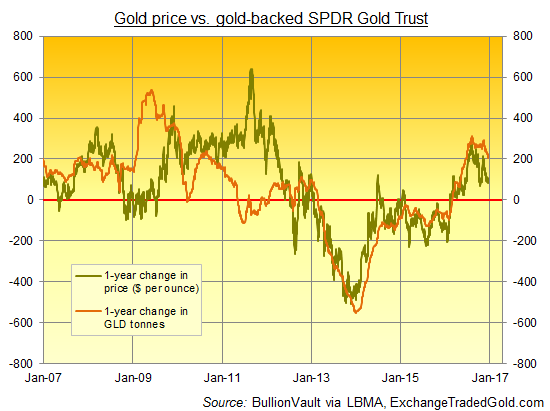 Like gold priced in Dollars, the Japanese Yen today reversed all its gains versus the US currency back to start-February’s level, while the Euro cracked through its floor at $1.0450 to hit its lowest USD value since December 2002.
That buoyed the gold price above last week’s 6-month low of €1078 per ounce.
Silver meantime sank 7.5% versus the Dollar from before the Fed announcement – more than twice the drop in gold prices – hitting near-7 month lows at $15.92 per ounce.
“The sell-off in [gold] ETFs is the result of lack of investor appetite,” says Australasian bank ANZ’s analyst Daniel Hynes.
“The weak physical markets in China and India are not really helping gold.”
“What gold is really reacting to,” Reuters also quotes Swiss bank UBS’s analyst Joni Teves – this year’s best gold price forecaster – “is the anticipation of three rate hikes next year instead of two.”
Raising rates from zero for the first time in 7 years last December, the Fed’s policy-making committee came into 2016 forecasting 1.4% interest rates by year-end, with rates rising again in 2017 to 2.4% and then 3.3% by end-2018.
Wednesday’s projections now see the Fed Funds rate at 1.4% by end-2017 – a whole year later than the forecast 12 months ago – with a rise to just 2.1% by end-2018.
“The pressure on gold is understandable if you look at yields, if you look at the Dollar,” Teves goes on.
“As long as yields are high, gold is going to struggle.”
Jumping as prices fell, 10-year US Treasury yields today rose to the highest since September 2014 at 2.60%, meaning that “the [35-year] bull run is definitely over” in US bond prices according to technical analyst Louise Yamada.
“Prices of bonds are going to go down and you are going to lose your capital,” says Yamada to Bloomberg News, which illustrates its story with a chart of 10-year yields showing the downtrend as a line joining 1981’s top at 16% to the last 3 years’ peaks.
The 10-year yields record lows of 1.45% in July 2012 and then 1.40% in July 2016 now mark a large “double bottom” Yamada adds, showing what technical analysis of price charts calls a strong “reversal pattern” pointing to a major upturn ahead.
Betting on Fed Funds futures contracts now predicts a third US central bank hike to overnight rates in June 2017, taking the ceiling to the highest since Lehman Brothers collapsed in September 2008 at 1.00%.
Government bonds worldwide fell hard with US Treasuries overnight, with Chinese sovereign debt prices dropping ‘limit down’ to suspend trading.
Shanghai gold prices held firm against the Yuan, which fell to its lowest Dollar value since before the Lehman Brothers’ collapse of late 2008.
With Beijing now restricting gold import licenses, that buoyed the Shanghai premium – over and above London quotes for gold in Dollars – to a new 3-year high at $38 per ounce.