GOLD PRICES rose versus the Euro but fell against the Dollar lunchtime Thursday in London, as Eurozone central-bank chief Draghi urged governments to boost fiscal stimulus and warned that inflation is likely to rise further, but held the 19-nation currency union’s key interest rates unchanged.
Dropping back towards the $1200 per ounce level for US investors, gold prices rose to €1132 versus the Euro.
Shanghai gold prices had earlier retreated near 3-week lows at the city’s afternoon price benchmark, as the Yuan slipped on the FX market from this week’s sharp rally off 8-year lows.
Ahead of next week’s key Lunar New Year retail demand, that cut the Shanghai premium over London quotes – a measure of China’s wholesale demand vs. supply – to $15 per ounce, some 6 times the typical incentive to new imports.
With Chinese investors and savers trying to escape the weakening Yuan, gold-backed ETF vehicles in the world’s No.1 gold-consumer nation are bucking the global trend and seeing net inflows, reports Bloomberg.
Huaan Yifu Gold ETF “is getting all the attention,” the newswire says, “attracting almost $72m last week” but keeping the 4-year old trust fund’s total asset value well below $1 billion.
Well over 30 times larger meantime, shareholdings in the world’s  largest exchange-traded gold trust – the New York-listed SPDR Gold product (NYSEArca:GLD) – held unchanged yet again on Wednesday, needing 807 tonnes of bullion to back its value, an 8-month low, despite gold prices trading near 8-week highs.
Bullish speculation by the ‘managed money’ category of traders in US Comex gold futures and options last week rose, net of bearish bets, by $2.5bn from an 11-month low beneath $4bn of total notional value. 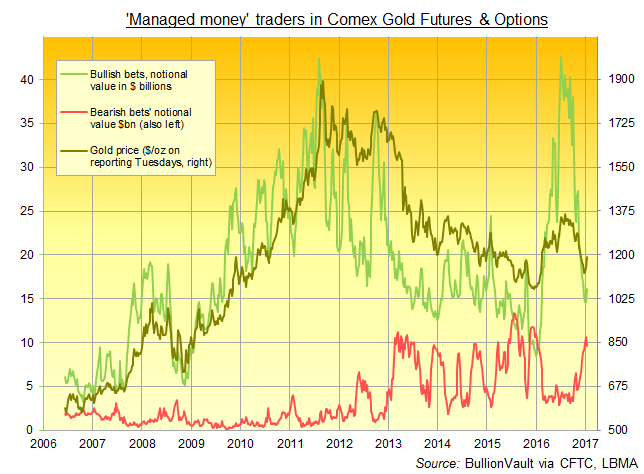 With 1 day until Donald Trump is sworn in as the 44th president of the United States, “Gold remains vulnerable to a further strengthening of the Dollar,” says Japanese conglomerate Mitsubishi’s precious metals specialist Jonathan Butler, “[especially if] US economic prospects are lifted by expectations of fiscal stimulus [and] President Trump’s plans for reduced corporate taxation.”
Forecasting a near-4% drop in 2017’s average gold price from last year however, “Increased fiscal spending…will widen the US Federal budget deficit,” Butler goes on, “[risking] protracted political disputes over government debt.
“Together with greater trade protectionism and/or geopolitical tensions, gold could be reasonably well supported as a risk hedge as the year wears on.”
Speaking at the annual Davos, Switzerland meeting of the self-declared World Economic Forum, IMF managing director Christine Lagarde today urged wealth redistribution through tax and benefits, while billionaire hedge-fund manager Ray Dalio agreed with Chinese leader Xi Jinping’s speech from Tuesday that “we may be at a point where globalization is ending, and provincialization and nationalization is taking hold.”
After Germany, the UK and then US all reported sharply higher inflation for December, the Czech central bank’s vice-president today said it will abandon the country’s 3-year currency peg to the Euro as rising inflation coincides with fresh capital outflows.
One of 7 European Union members not in the Eurozone but obliged to join the single currency at some point under the terms of accession, the Czech Republic has kept a hard cap on its Koruna’s value at 27 per Euro.
The CNB spent €7 billion defending the Koruna’s 27 per Euro ceiling in the first 10 days of January alone, according to Reuters data.