GOLD PRICES added $10 per ounce to $1217 in Asian and London trade Monday, recovering half of last week’s 1.6% drop as government bonds also stemmed their post-Trump victory losses.
World stock markets rose again, as did commodities, while the US Dollar eased back from its strongest level against the world’s other currencies since 2003.
Crude oil rose to 3-week highs as the Dollar eased back on the FX markets, and Chinese gold prices ticked higher in Yuan terms on solid trading volume in Shanghai, but silver regained only 10 cents of last week’s 80c plunge at $16.66 per ounce.
India’s surge of gold buyers after the government banned high-value banknotes to try and curb the country’s black economy now face investigation and possible sanctions for tax evasion, according to media reports.
Last week’s near 6-month lows in the gold price “have induced some interest in the physical market,” Reuters quotes bank analyst Daniel Hynes at ANZ in Sydney, pointing to Asian consumer markets.
“However, the Dollar has got some momentum behind it.”
Hedge funds and other speculators in US gold derivatives slashed their betting on higher prices after Trump’s election victory, new data showed late Friday. 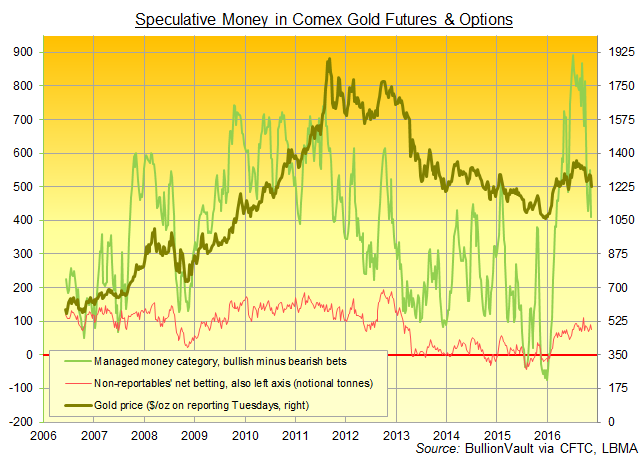 Falling for the first time in 4 weeks, the Managed Money category’s net speculative long position in Comex gold futures and options shrank 25% by the number of contracts and 28% by value between Tuesday 8th and Tuesday 15th November.
That cut the size of their bullish minus bearish betting by 54% from early July’s new all-time record high, immediately after the UK’s Brexit referendum.
“There was [also] massive selling in physically backed [ETF] products,” says Swiss private bank Julius Baer, a sponsor of several precious metals-backed exchange traded trust funds.
“Holdings nevertheless remain high, in particular for silver, and continued selling remains the biggest downside risk to prices.”
The quantity of gold needed to back shares in SPDR’s giant Gold Trust (NYSEArca:GLD) fell for a seventh session running on Friday, shrinking over 2% from the week before as shareholders liquidated stock to reach the lowest level since just before the UK’s end-June vote on quitting the European Union at 915 tonnes. 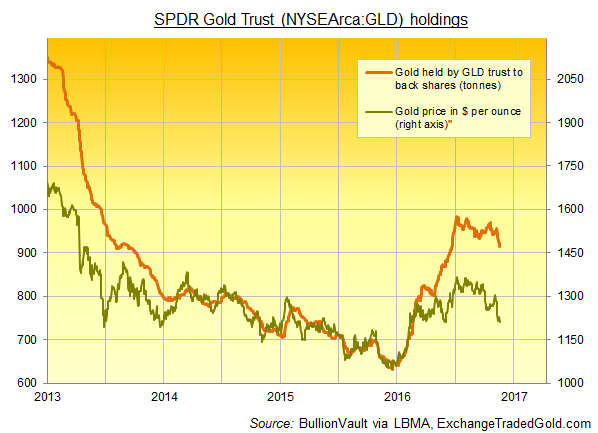 But “sentiment does not appear to be particularly bearish,” Julius Baer goes on, pointing to low levels of short bets in the Comex futures and options market.
“Receding growth risks, gradually increasing interest rates and a stronger Dollar call for a continued decline in prices [but] should the current high expectations about [US president-elect Donald Trump’s] policies not be met, safe-haven demand could return to the markets.”
Falling almost 10% after spiking on Trump’s victory, gold prices “faced stiff resistance near an ascending channel limit of $1330/1344,” says a new technical chart analysis from French investment and bullion market-making bank Societe Generale, highlighting the metal’s 2016 rise.
Gold’s “steady down move has achieved our advocated target of $1200,” SocGen goes on, pointing to May’s low in the US Dollar gold price.
“More importantly this is also the 50% retracement of the whole up-move from 2015 [six-year] bottom…Short term, a rebound looks more likely.”
“Support is firm at $1199.85,” says Canada’s Scotiabank again, but its technicals indicators “are bearish and risk remains to the downside.”