GOLD PRICES fell below $1350 per ounce Friday lunchtime in London, cutting the metal’s weekly Dollar gain to 1.7% and heading for a loss against other major currencies after touching a new 12-month high for US investors at what some chart analysts called a key level.
The Euro rose back to its strongest Dollar value since January 2015, peaking just shy of $1.21, while the Chinese Yuan hit USD levels last seen in December that year.
“After a phase of consolidation [after] a major trough late 2015,” says the latest technical analysis of Dollar gold prices from French investment and bullion market-making bank Societe Generale, “gold has recently accelerated the up move, as shown by the break above the descending trend in force since the all-time high in 2011.
“More importantly, gold formed a massive multi-year bullish reversal pattern (Inverted Head and Shoulder pattern)…and just probed its confirmation level at $1356.” 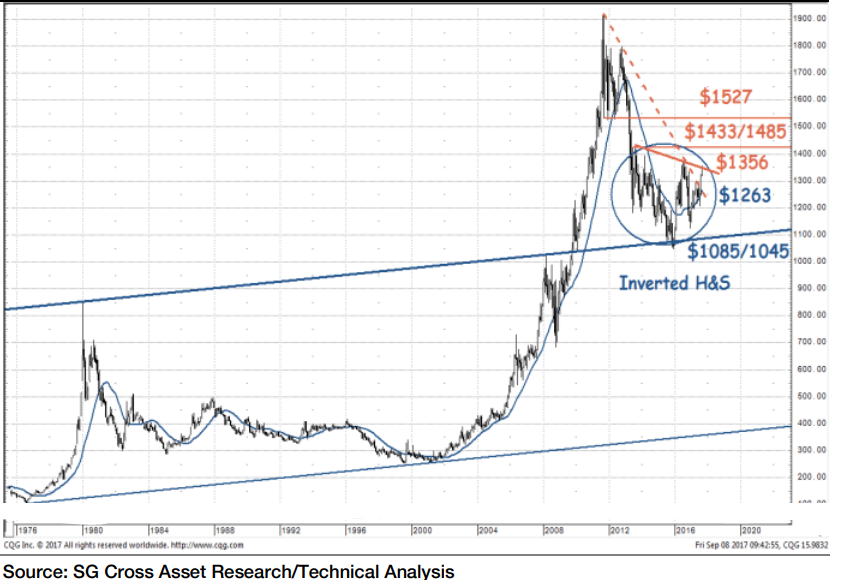 While the current surge “looks overstretched” short term, a further rise and weekly close above $1356 would see “the up-move extend further towards $1433/1485,” reckons SocGen’s technical analysis team.
With wind speeds expected to hit 165 miles per hour (270km/h) in southern Florida this Sunday meantime, half-a-million people have been told to leave the area and Irma will prove “devastating” according to the US federal emergency agency.
New data yesterday put US claims for jobless benefits at a sudden 2-year high on lay-offs amid Hurricanes Harvey and now Irma.
Thursday also saw the European Central Bank predict that it “should be ready to take the bulk of [QE tapering] decisions in October,” slowing the pace of bond purchases from the current €60 billion per month.
“[But] the recent volatility of the exchange rate represents a source of uncertainty,” said ECB chief Mario Draghi at his post-decision press conference.
Draghi’s comment was “actually pretty unequivocal” about the risk to tapering posed by Euro strength, says a commodities note from German financial services giant Commerzbank, “[but] were not enough to prevent a renewed surge in the Euro.
“Wednesday night’s agreement between US President Trump and the Democrats to extend the debt ceiling until 15 December was likewise unable to prevent the US Dollar from sliding further.”
Betting on the Fed raising its key interest rate before the end of this year has sunk the implied odds from a 46.7% probability to just 31.9% according to the CME’s FedWatch tool.
Euro gold prices had risen earlier on Friday but failed to reach Tuesday’s 3-month high at €1127, trading only 2.3% higher for 2017 to date.
Shanghai gold prices meantime set 3-month highs in Yuan terms and “China were on the bid,” says a note from Swiss refining and finance group MKS Pamp, “with the premium [to London quotes] sitting around $6/7” – double this week’s 12-month low in the incentive for new bullion imports into the world’s No.1 mining and consumer nation.