GOLD PRICES fell to fresh 15-week lows at $1260 per ounce Thursday afternoon in London, trading over 4% down from last weekend as European stock markets slipped for the second day running.
Silver also gave back an overnight rally, dropping below $17.60 to trade almost 8% down for the week so far.
Crude oil was unchanged just shy of $50 per barrel as analysts debated the likelihood of Opec cartel member states breaking the new output ceiling, agreed in principal last week in Vienna.
“Support in the near term comes in at $1258.40…[the] 200-day moving average,” says a technical analysis from Scotiabank (TSE:BNS), the parent of bullion market-maker Scotia Mocatta now facing a lawsuit in Manhattan over alleged ‘manipulation’ of former global benchmark prices, the London Gold Fix and Silver Fix.
“The 2016 [gold price] uptrend has been severed,” says technical analyst Karen Jones at Germany’s Commerzbank of this week’s gold price chart.
“The rebound…is viewed as corrective only [now that] spot gold has failed at the 2011-2016 downtrend located at $1350 and eroded the 2016 uptrend.
“This is quite negative price action.”
But “Gold achieved a significant bottom late 2015 and formed a large base,” says updated technical analysis from French investment bank and bullion market-maker Societe Generale (EPA:GLE) – also facing the Gold Fix lawsuit in New York.
“Breach[ing] above a down-sloping trend drawn since 2013 [gold prices in 2016 made] an impressive rally spanning over nearly seven months.”
This year’s break “above that resistance line is still valid,” SocGen says, repeating its longer-term target of gold’s August 2013 highs of $1400-1435.
“[If] downward momentum gains further traction, [that former downwards] trend line since 2013 [now] at $1200 should act as a floor.” 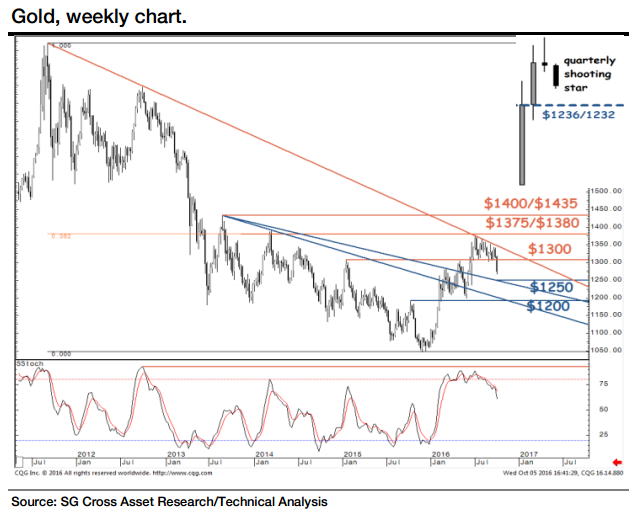 Meantime in Manhattan, both SocGen and Scotiabank will face anti-trust and manipulation claims – together with Barclays Bank (LON:BARC) and HSBC Holdings (LON:HSBA) – after US District Judge Valerie Caproni decided to allow a lawsuit brought by a group of investors to move forward against members of the now defunct London Gold Fixing Limited, alleging unlawful restraint of trade from January 2006 to December 2012.
Germany’s Deutsche Bank (ETR:DBK) – which spurred the Gold and Silver Fixes’ replacement by quitting in January 2014 – settled with the plaintiffs for an undisclosed sum this April.
“From the gold plaintiffs’ standpoint, [gaining leave to proceed is] very substantial victory,” Reuters quotes one of the investors’ legal team, first brought together when 18 separate suits were consolidated in summer 2014.
Swiss bank UBS this week had its role in the claims dismissed, having noted in summer 2015 that it had never been a member of London Gold Market Fixing Limited.
“Plaintiffs strain to oppose dismissal by misreading their own complaint and drawing inapt comparisons to unrelated conduct outside the gold fix setting,” UBS told the court, “offer[ing] nothing beyond ‘labels and conclusions’ and facts showing at most merely parallel conduct” – phrases repeated by Judge Caproni in this week’s decision to dismiss.
Claims against HSBC and Scotiabank will also now move forward regarding the Silver Fix after Caproni said the plaintiffs had sufficiently alleged – “albeit barely” – that they together with Deutsche Bank had violated US antitrust law from 2007 to 2013.