GOLD PRICES held steady in quiet trade Monday lunchtime in London, with Wall Street on holiday for President’s Day and investors waiting for speeches this week from five Fed officials on the possible timing of US interest rate hikes, writes Steffen Grosshauser at BullionVault.
Gold oscillated in a narrow $8 range around last Friday’s close of $1234 per ounce, its third consecutive weekly gain.
Silver also held firm around $18.00 on Monday while most base metals prices were slightly up.
“We expect muted trading to start the week in Asia with a US holiday today, although a break in gold [below] $1231 may flush away some nervous long positions,” reckons Jeffrey Halley, senior market analyst at data providers Oanda.
“On the fundamental side, although a stronger Dollar and buoyant US equities could potentially act as a drag on gold, other variables will likely prevent a more significant selloff,” says US brokerage INTL FCStone analyst Edward Meir.
Data released late Friday showed ‘Managed Money’ speculators in Comex gold futures and options cutting their bullish positions as a group last week.
Net of their bearish bets, their speculative long position fell for the first time in three weeks according to US regulator the CFTC’s Commitment of Traders report, cutting it to 56% of the last 10 years’ average. 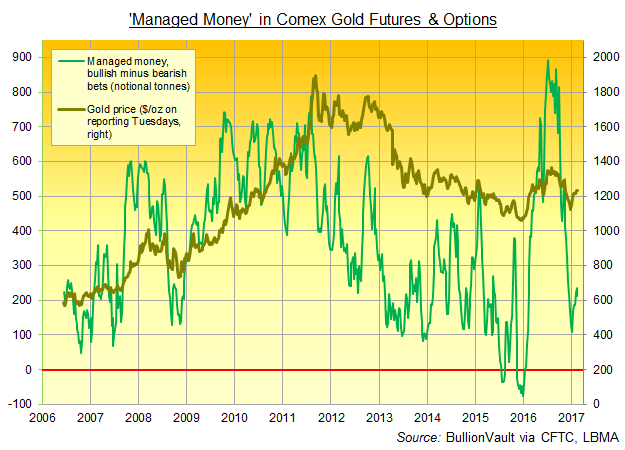 In contrast to gold, the net long position of money managers trading Comex silver derivatives increased for the seventh week in a row on the CFTC data.
Reaching the highest level since late September, it stood at 3 times the last decade’s average size.
The iShares Silver Trust (NYSEArca:SLV) held unchanged in size yet again Friday, extending its pause in net new shareholder interest to 2 weeks.
Gold holdings for the world’s largest gold-backed exchange-traded fund vehicle, the SPDR Gold Trust (NYSEArca:GLD), fell by 0.3% but remained 40 tonnes greater for this month so far at 841 tonnes.
After speculation that the US Federal Reserve could raise interest rates as early as March increased in recent weeks, Cleveland Fed President Loretta Mester said yesterday she would be “comfortable with an increase in the funds rate at this point, if the economy keeps going the way it’s going”.
Fed chair Janet Yellen last week told the Senate Banking Committee that more interest rate hikes would be “appropriate” if the US economy stays on course.
While rising interest rates are often seen as negative for non-yielding assets such as gold, the precious climbed after the last three US interest rate increases, notes a story on Bloomberg today.
Bottoming at a 6-year low when the Fed first raised its key interest rate from zero in December 2015, gold prices have again risen from an 11-month low since December 2016’s follow-up rise to a ceiling of 0.75%.
Analysis by BullionVault shows that over the last 30 years, a rate hike has seen gold prices rise 6.9% on average over the following 12 months.
That contrasts with a 5.5% average if no change, and a 2.6% rise on a Fed cut.