GOLD PRICES slipped but held on track for the highest Friday finish since July for Dollar and Euro investors today, as the United States issued what one analyst reckons is a “final warning” to China over currency manipulation and Italy’s cost of borrowing rose to new 5-year highs compared to German Bund yields.
Trading $5 below Monday’s spike to 12-week highs at $1233 per ounce, gold prices have now risen for 3 weeks running – the longest stretch of US Dollar gains since January.
Crude oil rose back above $80 per barrel of Brent after US President Donald Trump also said “it certainly looks that” the Saudi government murdered US-based journalist Jamal Khashoggi in Istanbul, warning of “very severe” consequences – a threat already challenged by the oil-producing kingdom.
A key suspect in the murder has died in a “suspicious car accident” in Riyadh, claims Turkish newspaper Yeni Şafak.
Priced in the falling Euro currency gold headed for its highest weekly finish since June at €1071 per ounce, rising 4.4% so far in October as the EuroStoxx 600 index has lost 5.7%.
Shares in European banks fell yet again Friday, reaching the lowest price since New Year 2016 as Germany said giant Spanish lender Santander has joined the list under investigation for the “cum ex” dividend tax credit fraud, thought to have cost Eurozone taxpayers €55bn over 15 years.
With Rome’s coalition government meantime facing a showdown with its EU partners over 2019’s deficit spending plans, the spread of Italy’s borrowing cost over comparable German Bunds today touched 340 basis points, a new 5-year high. 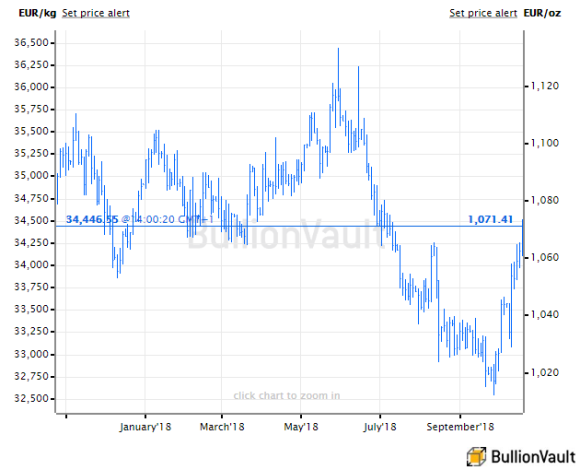 Refraining from calling China a “currency manipulator” – a charge Beijing has repeatedly denied – the US Treasury last night said Washington is “deeply disappointed” the politburo won’t say when or if it intervenes in the FX market.
The Yuan today slipped to its lowest in 22 months, helping push the gold price for households and investors in the metals No.1 consumer market up to the highest since January.
Over in No.2 consumer market India, reports today varied wildly over the level of household gold demand during the Hindu calendar’s key festive season, set to culminate with Diwali in early November.
“Gold continues to be a safe haven for investors,” DNA quotes Surendra Mehta of the Indian Bullion & Jewellers Association (IBJA), “especially when they are rapidly withdrawing money from equity, bonds and Non Banking Finance Companies.”
But “gold jewellery sales have declined by 30%” from this time last year, the Times of India quotes Ahmedabad jeweler Kishore Zaveri.
“Only those who plan to buy jewelry for regular usage or weddings have pushed their purchases to this day,” he says, referring to Thursday’s Dussehra festival of good-defeating-evil.
“Markets around Delhi are still waiting for festival shoppers,” agrees the National Herald.
“According to shopkeepers, customers don’t have the money to splurge” thanks to the Rupee falling to new all-time lows in 2018, driving living costs higher and taking gold prices to multi-year highs.
Gold bullion imports to Indian rose 4% over the last 6 months versus the same period last year, says the Business Standard, “inflating the country’s trade deficit and fuelling worries about the current account deficit” with the rest of the world.
Gold priced in British Pounds meantime neared 11-week highs up at £944 per ounce, gaining 2.0% for the week as Sterling managed only a weak rally following news that the UK has struck a deal with Spain over the post-Brexit treatment of Gibraltor.
“Those issues on which we don’t agree,” said Spanish foreign minister Josep Borrell, “will be left for the transition period” of the UK’s exit from the European Union, now set to run until as late as 2021.