GOLD PRICES jumped and world stock markets rose with all major government bonds on Thursday after the Bank of England made its first change to UK interest rates in over 7 years by cutting to a new all-time low of 0.25% and announcing up to $220 billion-worth of new quantitative easing following the Brexit referendum result.
Gold prices jumped over 2% for UK investors as the Pound dropped over 2 cents to the Dollar, falling beneath $1.3550.
Priced in the US Dollar, gold rose 0.9% for the week so far, nearing 3-week highs at $1363 per ounce.
Silver broke its last month of outperformance however, lagging gold prices despite the Bank of England decision to trade flat from last week’s finish at $20.33 per ounce as crude oil slipped and copper prices fell 1.7% on the day.
Besides adding £60 billion to the existing £375bn pile of revolving government bond purchases last increased in 2012, the Bank of England will create £10bn of additional QE money to buy corporate bonds, plus up to £100bn for a new Term Funding Scheme – detailed in Thursday’s new quarterly Inflation Report – which offers loans to commercial banks at the official 0.25% rate to ease pressure on their margins between customer deposit and lending rates. 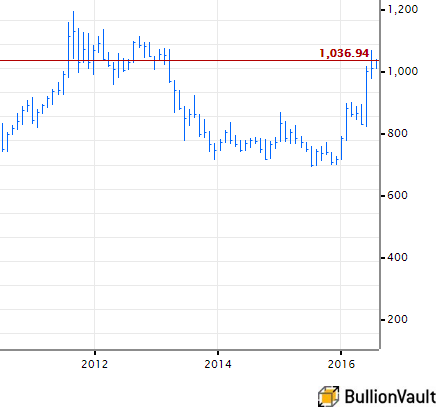 This all puts savers in a “very difficult position” admitted Governor Mark Carney in a press conference, but failing to act would see the UK slide into recession, he said, following June’s Brexit referendum result on quitting the free trade, capital and labor market of the European Union.
UK bond yields sank as government debt prices jumped, driving the 10-year yield down to new all-time record lows beneath 0.7% per annum.
The FTSE-100 share index leapt as bond prices rose, turning a 0.3% loss into a 1.6% gain within an hour led by banks, home-builders, and insurance companies.
London’s worst performing stocks included Randgold Resources – one of the world’s top 15 producers – down 6% lower by lunchtime despite the rise in gold prices, after bucking the 2016 uptrend in gold miner margins by reporting a drop in quarterly output and profit thanks to mechanical failures at key sites.
“Gold prices [had already] seen a very strong recovery,” says the latest technical chart analysis from German finance giant Commerzbank’s Karen Jones, pointing to the rally starting in late-July “just ahead of initial support at $1304…the May high, the 200-week moving average and the 23.6% [Fibonacci] retracement of the move seen this year.
“While above here that the up move remains fully entrenched…[with] a longer term target of $1450.”
Ahead of Friday’s non-farm US jobs data for July, “A lot of people are on holiday, but the algorithms and [high-frequency trading] systems don’t go on holiday,” says a note from David Govett in London for brokers Marex Spectron – “and they are the ones that push these markets further than would be normally expected.
“With the absence of genuine traders, we see exaggerated moves amidst thinner than normal volumes.”
US lay-offs rose 19% in July, said out-sourcing consultants Challenger, Grey & Christmas in new data, the second monthly rise in a row, with employers announcing over 45,000 cuts.
Last week’s claims for US jobless benefits rose above analysts’ forecasts.