GOLD PRICES held in a tight range 0.3% either side of last week’s finish at $1244 per ounce in Asia and London on Monday, retaining last week’s $30 gains as world stock markets struggled, commodities rose and major government bond yields bounced after Friday’s US jobs report shocked analysts and traders with the worst monthly print since September 2010.
Monday’s new data said Germany’s factory orders fell 2.0% in April from March – far worse than the 0.6% drop forecast.
Friday’s US non-farm payrolls data reversed almost all expectations that mid-June’s Fed meeting will be “live” for a possible rate hike – a near-consensus view only one week earlier.
“Markets have become quite sensitive to the possibility of a prolonged period of low growth, low inflation, and economic underperformance,” said US Fed governor Lael Brainard in a speech late Friday, after the May jobs report.
Also warning that this month’s UK referendum on leaving the European Union threatens volatility, “Some of the conditions underlying recent bouts of turmoil largely remain in place,” Brainard went on.
“An important reason for the fading of [such] turbulence was the expectation of more gradual US monetary policy tightening.”
US Fed chair Janet Yellen will give her last speech before next week’s June decision later today.
Shanghai’s benchmarking gold price auction rose more than 2% higher from Friday in Renmimbi terms today. Yet Chinese gold prices fell to a discount to international prices, dropping more than $1 per ounce below London quotes as Dollar prices rose faster.
Ahead of the jobs data, in the week-ending last Tuesday, speculative traders in US gold futures and options cut their bullish betting twice as fast as their bearish bets, reducing their net bullishness to an 8-week low, data from US regulators the CFTC showed after Friday’s market close.
Now 28% smaller from the new all-time record high set a month ago, the “large non-commercial” net long position remained 2.6 times the size of the last 20 years’ average. 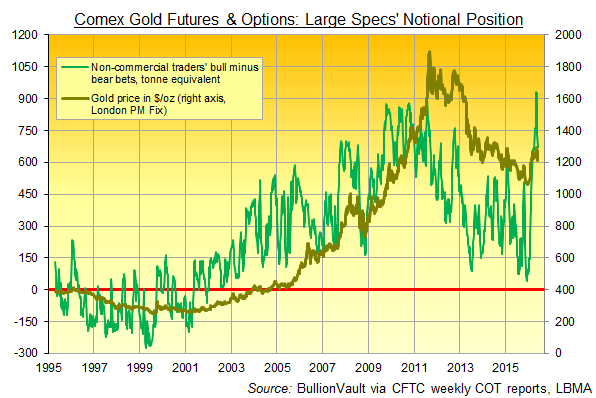 Speculative traders also cut their bullish position in Comex silver futures and options from mid-May’s new all-time record high for the third week running.
Down to the equivalent of 9,776 tonnes however, that position of bullish minus bearish bets amongst non-industry players remained 2.4 times the size of the last 20 years’ average.
Silver investment through cash-price vehicles rose sharply Friday, with the number of shares issued by the iShares Silver Trust (NYSEArca:SLV) expanding 0.5% to need 10,491 tonnes of bullion backing – the most since December 2014.
Friday saw the giant SPDR Gold Trust (NYSEArca:GLD) expand again, growing for the 52nd day so far in 2016 – more than 2.5 times as often as the fund’s previous 10-year average – to need 881 tonnes of bullion backing, the most since mid-October 2013.
In contrast to silver ETFs, the precious metals price drop of 2012-2015 had seen the number of shares issued in gold-backed trust funds fall sharply, more than halving by the end of last year.
Silver today tracked gold prices, holding above last week’s finish at $16.44 and briefly spiking to a 6-session high at $16.53 per ounce.
“The probability of a hike in June has decreased,” Bloomberg quotes fixed-income fund manager Wontark Doh at the $200 billion Samung Asset Management in Seoul, Korea.
“Demand [for US Treasuries] will persist. That has an effect on all other countries [via lower interest rates].”