GOLD PRICES rose against all major currencies bar the Japanese Yen on Thursday, gaining after the Federal Reserve raised its key Dollar interest rate as expected but world stock markets fell amid what analysts called anxiety over US President Trump’s anti-free trade policies.
Dollar priced gold rose above $1330 per ounce and Euro gold prices reversed all of March’s previous 1.5% drop to trade at €1080.
The UK gold price in Pounds per ounce erased this week’s drop to the lowest since mid-December to trade back at £942 per ounce as the Bank of England held its key policy rate at 0.5%, more than two whole percentage points below the rate of consumer-price inflation.
Asian stock markets meantime closed lower and European equities then tumbled, losing over 1.5% on average ahead of a 12:30 announcement in Washington when Trump will unveil what an aide called “actions [against] China’s state-led, market-distorting efforts to force, pressure, and steal US technologies and intellectual property.”
Giving the shortest post-Fed-vote press conference yesterday since these quarterly briefings began in spring 2011, “There is no sense in the data that we are on the cusp of an acceleration of inflation,” said Powell, contrasting the “theory” of a strong jobs market leading to higher wages and prices with what the Fed currently sees.
Betting on Fed funds futures was little changed Thursday morning from before the March decision, with the consensus still matching the Fed’s own forecast for a total of 3 rate rises in 2018.
Bond prices rallied sharply however as global stock markets fell, driving longer-term interest rates lower as commodity markets retreated.
But “the acceleration in [costs in] the private borrowing market is the story of the year, not the Fed,” said US investment bank Morgan Stanley’s chief Asia strategist Jonathan Garner to Bloomberg this morning.
“That’s a key reason why [stock] markets have struggled.”
Last week already saw the gap between interbank lending costs and the US Fed’s overnight target rate rising at its fastest quarterly pace since late 2008’s global financial crisis, widening by half-a-percentage point from the turn of this year.
Three-month Libor today hit 2.2%, a full percentage point higher from this time last year.
This may be signalling an incipient squeeze in the offshore Dollar funding markets,” says London Telegraph economics editor Ambrose Evans-Pritchard, “the culprit that caused the 2007-2008 crisis to metastasize.
“[But] some say the recent move is a technical blip linked to US tax reform.  It is certainly not at acute danger levels yet.” 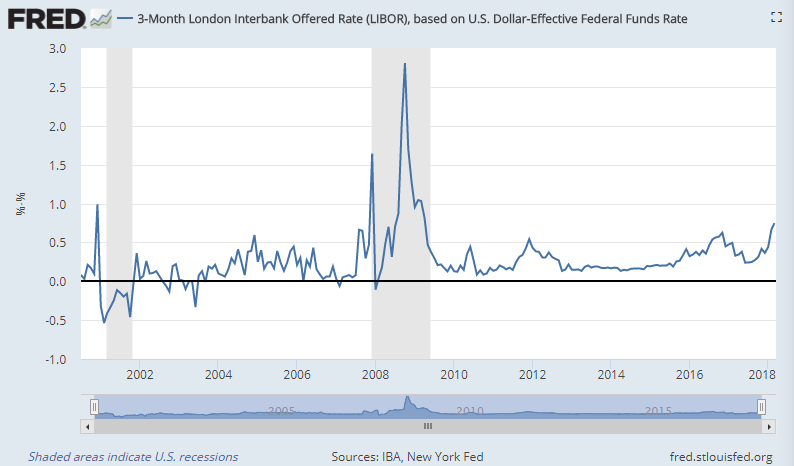 Gold rose Thursday back towards the 2-week high of $1336 hit overnight following the US Fed’s decision.
Silver held at $16.50, some 2.3% above Tuesday’s 3-month low but still only halving last week’s drop.
Platinum prices retreated to $953, up 1.2% from Monday’s 11-week low to trade in line with last Friday’s finish.
“A full-blown trade war [looks] unlikely at this point,” says the latest weekly analysis from specialist consultants Metals Focus, but it “could have wider implications for global markets and for the gold price.”
Should the US impose yet more tariffs, tit-for-tat retaliation by China and the EU could weaken the Dollar “and benefit gold” by hurting the United States’ own export sales, Metals Focus says.
Worsening relationships could also “damage global trade and growth,” hurting world stock markets and spiking volatility, again boosting gold investment.
“Third, muted economic growth would most likely result in a slower pace of Fed rate hikes,” Metals Focus says, and “a shallower rate hike trajectory would be constructive for gold.”
European Union trade commissioner Cecilia Malmstrom yesterday said the 28-nation economic zone is likely to get an exemption from the United States’ new tariffs on steel and aluminum imports.
But for China, “In the front line would be firms with significant exposure to the US, mostly in the tech and consumer sectors,” reckons a note from French investment bank Societe Generale.
Shanghai’s stock market today slipped 0.8% to 2-week lows while on-shore gold prices in the world’s No.1 gold consumer nation rose to 2-week highs.