GOLD PRICES edged lower on Monday even as US-China trade tensions failed to improve at a key summit, while longer-term interest rates edged higher amid rumors the US Federal Reserve may end its monetary tightening sooner than expected, writes Atsuko Whitehouse at BullionVault.
World stock markets pushed up 0.3% but crude oil slipped with gold prices.
“As you move in the range of policy that by some estimates is close to neutral,” said US Fed vice chair Richard Clarida on Friday, “then with the economy doing well it’s appropriate to sort of shift the emphasis toward being more data dependent.”
Hitting the lowest level since early October at 3.06% on Clarida’s comments, benchmark 10-year US Treasury yields rose 3 basis points Monday, but held well below this month’s fresh 7-year high at 3.24%.
“The possibility that the Fed might hold a neutral outlook beyond 2018 will keep investors a little more interested in gold‘s safe haven appeal,” reckons Benjamin Lu, a commodities analyst at Phillip Futures in Singapore, also pointing to “a slowdown in the global economy amid the ongoing US-China trade spat.”
Having gained 4 consecutive days last week, spot gold fell 0.2% to $1220 per ounce Monday lunch time in London.
Holdings in the world’s largest gold-backed exchange-traded fund, the SPDR Gold Trust (NYSEArca:GLD), expanded 4.5 tonnes during the last week to 759 tonnes.
But last week saw hedge funds and other money managers increase their bearish betting against gold and cut their bullish bets on Comex futures and options, according to data from US regulators the Commodity Futures Trading Commission.
Net-net that grew the Managed Money category’s overall short position in Comex gold derivatives by 89% from a week before, up to the notional equivalent of 220 tonnes last Tuesday when gold prices broke $1200 per ounce.
That was the largest net short position in five weeks. 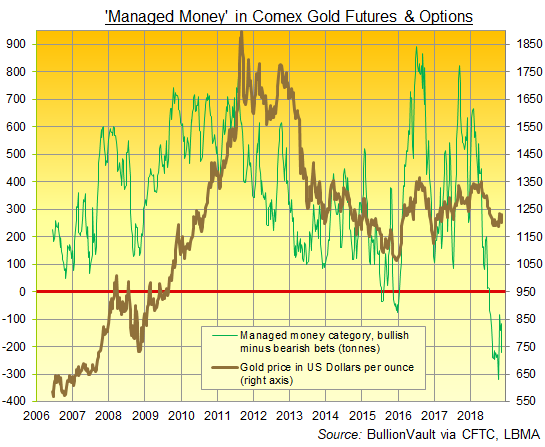 The British Pound meantime rallied on the currency market Monday, capping the UK gold price in Pounds per ounce at £950, as Prime Minister Theresa May sought to win support for her draft European Union withdrawal agreement.
Today May told the CBI business lobby group’s annual conference she would not let talk of a leadership challenge distract her from a critical week of negotiations with Brussels.
Already suggesting the UK’s two-year transition period could be extended to 2022, chief EU negotiator Michel Barnier will meet ambassadors from the remaining 27 member states next weekend to approve the deal.
The European Commission is meantime due to issue its opinion on Italy’s planned 2019 budget deficit of 2.4% this Wednesday – a move Italy’s deputy Luigi Di Maio insists Rome will ignore to maintain its “big reforms”.
Like the single Euro currency, gold prices for European investors held flat Monday morning, trading at €1069 per ounce.
The Asia-Pacific Economic Cooperation (Apec) summit meantime ended yesterday with political leaders failing to agree on a formal joint statement for the first time in its 25-year history.
Tensions were already high after China’s President Xi Jinping and US vice-president Mike Pence traded barbs in back-to-back speeches on Saturday.
Pence warned nations against taking Chinese loans, saying the US “doesn’t drown our partners in a sea of debt,” while Xi said implementing tariffs and breaking up supply chains was “short-sighted” and “doomed to failure”.
Trading activity may be thinner than usual this week as the US marks the Thanksgiving holiday on Thursday.
Tomorrow the London Bullion Market Association will release wholesale gold trading volumes among its professional membership for the first time.