GOLD PRICES started the week lower against a falling US Dollar on Monday, while equity markets surged after Friday’s strong US job data eased fears of inflation, writes Steffen Grosshauser at BullionVault.
With the US central bank expected to hike interest rates at its March meeting next week, gold fell 0.5% even as the Dollar dropped on the FX market, touching what technical analysts called “nearby support” at $1317 per ounce after finishing last week almost unchanged at $1323.
US data showed on Friday a strong increase of more than 300,000 new jobs in February but a slowdown in wage growth, easing concerns that the Fed could hike rates more quickly than expected.
Asian and European equity markets surged Monday morning to a 2-week high, with the Stoxx Europe 600 Index rising for a sixth day and setting its longest winning streak since October.
Silver tracked gold prices lower, falling back to $16.45 per ounce after also recovering last week’s earlier losses by Friday’s finish.
“We expect gold prices to trade lower on Monday as robust US nonfarm payrolls numbers boost global risk appetite,” according to Indian stock brokers Angel Commodities.
“We still are somewhat wary on gold short-term,” agrees brokerage INTL FCStone’s analyst Edward Meir, “as we suspect that the precious metal will struggle on account of a stronger Dollar…closer to the Fed meeting [next week].”
Hedge funds and other leveraged speculators modestly raised their bullish bets on Comex gold in the week to 6 March, according to the latest Commodity Futures Trading Commission (CFTC) data.
Remaining negative in contrast on silver futures and options overall for the fourth week running, the ‘Managed Money’ category held gold bets some 31% more bullish than that group’s historic average at the close of last Tuesday’s trade.
Investor interest meantime held unchanged last week in the world’s largest bullion-backed trust funds, the SPDR Gold Trust (NYSEArca:GLD) and the iShares Silver Trust (NYSEArca:SLV). 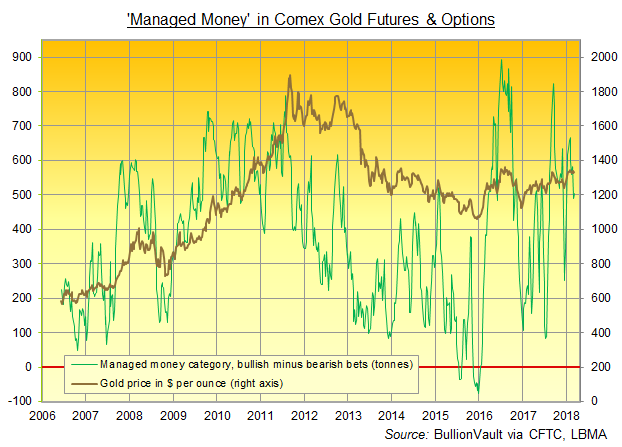 “[Gold] could be overwhelmed by headwinds of higher bond yields and a stronger US Dollar,” warns exchange-traded trust fund provider ETF Securities’ Maxwell Gold.
Bond yields slipped Monday, as did the Dollar. That helped cut gold prices for Euro investors back towards last week’s 2.5-month lows at €1065.
“Precious metals [will] follow the familiar pattern of selling off ahead of the Federal Reserve’s monetary policy decision and then rallying once investors gauge the underlying trajectory of interest rates for the rest of the year,” ETFS’s Gold believes.
But “the labour report that we saw in the US on Friday has spilled over into this week [and a] slowdown in the growth of wages last month has certainly eased concerns about more aggressive rate hikes,” says analyst Daniel Hynes at Australian bank ANZ.