GOLD PRICES failed to hold yesterday’s rally on Friday in Asian and London trade, heading for the 5th weekly loss in 6 as world stock markets rose and India’s key gold-buying festival season of Diwali ended.
Major government bond prices fell, pushing 10-year US Treasury yields up towards early October’s 3-month highs at 2.36% after the Senate voted yesterday to approve President Trump’s push for major tax cuts.
The US Dollar rose once more, holding the Euro near $1.18 and edging gold down to $1282 per ounce.
Wholesale gold prices in India – the No.2 consumer nation behind China – fell in Rupee terms but attracted only “some token buying by jewellers” as Diwali has now finished.
Retailers are widely reporting a 30% drop in jewelry sales compared to typical autumn festive levels, but “overall…demand was down around 15%” nationwide, reckons Nitin Khandelwal, chairman of the All Indian Gems & Jewellery Trade Federation.
Asian and European stock markets rose Friday after Wall Street ended last night at yet more fresh all-time highs, adding over 27% to the Dow Jones Industrial Index for 2017 to date.
Shareholdings in the giant gold-backed SPDR Gold Trust (NYSEArca:GLD) ended Thursday unchanged for the 4th day running, needing some 853 tonnes of bullion to support its value. 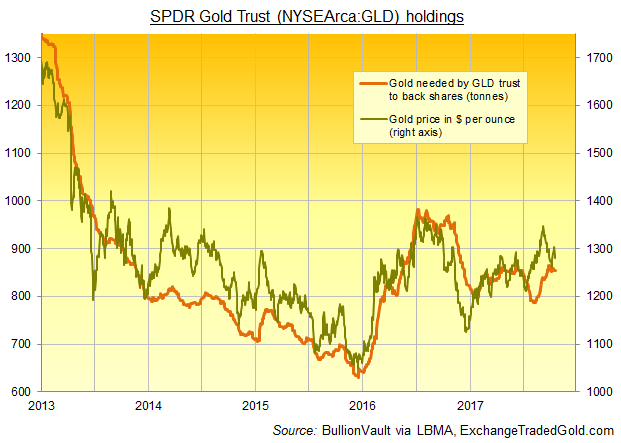 “The Dollar is up on account of the Senate vote,” reckons brokerage INTL FCStone’s Edward Meir, quoted by Reuters.
“That in turn could pave the way for introducing a tax reform bill…seen as a cause for higher [Fed] rates.”
This week’s drop in gold prices – now 1.7% below Monday’s brief 3-week high – “implies a test of the current October low and the 200-day moving average [around] $1260,” says the latest Bullion Weekly Technicals from Germany’s Commerzbank.
“Below the 2017 uptrend [now at] $1243 we would allow for further slippage. [But] our longer term bias remains bullish.”
Carnegie Endowment associate Michael Swaine was quick to retract and apologize for a tweet on Thursday saying that Trump had authorized a “limited strike” against North Korea over its nuclear missile tests.
“Gold is an easy story to sell [on such news],” says James Calder, research director at City Asset Management in London.
“However, while it will be a huge tail risk event, the probability remains low and we have not been changing our portfolios on the basis of it.”
“Ongoing Fed balance sheet tapering does give something for gold prices to point south into the year-end,” says commodities economist Barnabas Gan at Singapore’s OCBC Bank, pointing to near-term support for prices at $1280 per ounce.
Back in India, the government yesterday added new curbs on gold imports by so-called “star trading houses”, requiring proof of domestic use for new shipments in a bid to block value-added sales tax scams known as “round tripping” estimated at 120-130 tonnes every year.
Despite India’s official ban on gold bullion exports, gross inflows of 648 tonnes last year contrasted with net inflows of 558 tonnes on data compiled for the mining-backed World Gold Council.