GOLD PRICES extended their slide Thursday lunchtime in London to 2.5% since Monday – the second such weekly drop in a row – as corporate debt and government bond yields rose again ahead of next week’s Federal Reserve decision on interest rates.
World stock markets held flat overall but commodity prices also dropped hard against the rising US Dollar, while silver hit new 5-week lows of its own, down nearly 7% from end-February’s high to trade below $17.20 per ounce.
The Euro currency – down 3% versus the Dollar from the start of last month – spiked but lost that half-a-cent bounce after the European Central Bank made no changes to its negative interest-rate or QE money creation policies, continuing to buy €80 billion of government debt every month.
Brent crude oil contracts meantime suffered their worst 1-day drop in over a year according to the Financial Times, falling towards $52 per barrel today.
Physical product from 5 out of 10 fields tracked by Reuters has already fallen faster than that benchmark so far in 2017.
Brent now faces “pivotal support at $50” according to a new technical analysis from French investment and bullion market-making bank Societe Generale.
Looking at US interest rates, “The 10-year [Treasury] yield can rise above 3.25% and still [leave the bond’s price] in a bull market,” says SocGen’s global strategist Albert Edwards, warning that next week’s clearly flagged Fed hike to overnight rates risks a repeat of the 1994 bond “bloodbath”. 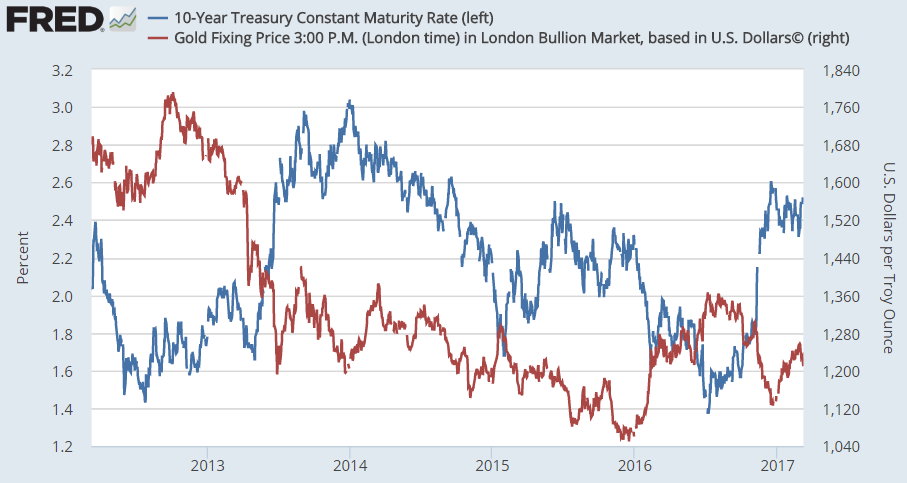 “The US Fed has created another massive credit bubble that will, when it bursts, lay the global economy very low indeed,” says Edwards, predicting that US yields will in time “converge with Japanese and European yields well below zero.”
First however, and with the Fed “having presided over one of the biggest corporate credit bubbles in US history,” the central bank’s sudden 2017 shift to “accelerated” rate hikes “will cause tremors in the Treasury bond markets, forcing rates up.”
“US investment-grade companies are the most leveraged since 2002,” noted Bloomberg columnist Lisa Abramowicz earlier this week, citing data from US investment bank Morgan Stanley that also says corporate cash holdings have sunk to the lowest level relative to obligations since the financial crisis and global economic slump of 2009.
“Leverage ratios typically peak in the wake of an economic downturn, when company incomes drop,” said Abramowicz.
“This time however leverage [has been] climbing as growth accelerates.”
The last time 10-year US Treasury yields touched 3.00% was December 2013.
Gold bullion then traded at $1214 per ounce, down by more than one quarter from the start of that year, which the 10-year yield began at 1.73%.
“Tighter monetary policy is not bullish [for gold prices],” says a new research note from US financial services giant Bank of America Merrill Lynch.,
“[But] inflation and a range of uncertainties – including European elections and protectionism – should support the yellow metal…[to] $1400 by year-end.”
Amongst the key consumer markets on Thursday, “Asian interest [in gold] was generally non-existent today,” said the bullion desk at Swiss refining group MKS Pamp.
“The speculative buying we have been seeing in recent sessions seems to have dried up…and the metal is likely to see further weakness around Friday’s [non-farm US jobs] print should the data follow the strong ADP performance.”
Dollar gold prices have now fallen for 7 in the last 8 sessions, retreating nearly 5% from 27 February’s 3.5-month peak above $1263 per ounce.