GOLD PRICES set new 15-week lows for Dollar, Euro and Yen investors on Wednesday, extending yesterday’s 3% plunge to touch $1267 per ounce as world stock markets fell for a second session running after a US Fed member said interest rates should be higher, and the European Central Bank tried to dampen speculation that it will soon ‘taper’ its monthly QE money creation scheme.
Only gold priced in Sterling held firm, trading above £1000 per ounce – a 3-year high when first reached on the UK’s shock Brexit referendum result – as the British Pound fell to new 31-year lows on the FX market amid policy speeches from the ruling Conservative Party’s new prime minister, Theresa May, and her cabinet.
Aso-called “hard Brexit” from the European Union’s single market could cost 75,000 jobs and £10 billion ($13bn) in tax revenues from the City of London, said one financial consultancy today. 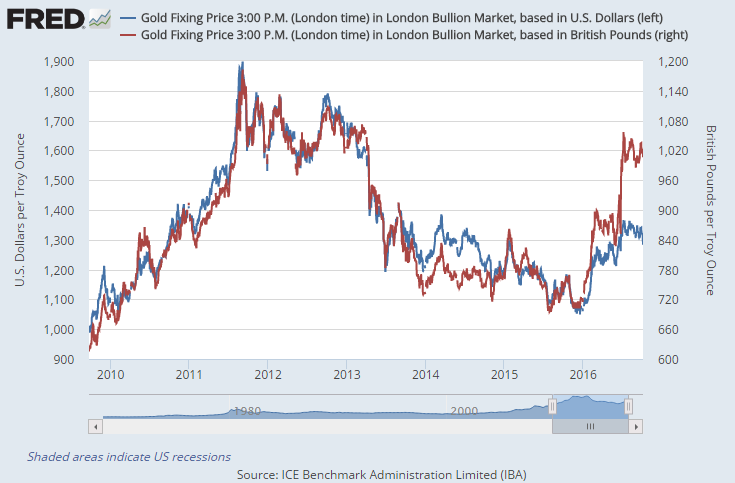 “I would have dissented” at the Federal Reserve’s September meeting, said non-voting member Richmond Fed President Jeffrey Lacker yesterday – the only dissenter voting to raise when the US central bank surprised analysts and traders by not hiking in September 2015.
“Pre-emptive increases in the federal funds rate are likely to play a critical role in maintaining the stability of inflation,” he said.
A separate rumor reported by Bloomberg News meantime said Tuesday that the European Central Bank – currently creating €80 billion per month for QE asset purchases, and charging commercial banks 0.4% per year on excess deposits – has agreed that, when quantitative easing ends it will end slowly, with new QE being ‘tapered’ rather than halted abruptly.
“The report was stating the bleeding obvious,” says a trading note from commodity and bullion brokers Marex Spectron in London.
“However nowadays, just words on paper or screens are enough for the herd to stampede.”
“The front-month gold futures contract recorded its biggest daily loss in nearly three years,” says a commodities note from Germany’s Commerzbank, with “trading volume on the futures market more than twice” its recent average.
Gold prices falling “below the 100-day moving average and the psychologically important $1300 mark resulted in wide-scale liquidation of long positions,” it goes on, but the current “lower price level is likely in our opinion to attract buyers.
“We do not expect any further significant price fall.”
The ECB has meantime “put a lot of emphasis on its forward guidance,” says economist Frederik Ducrozet at Swiss private bank Pictet, but “we believe that QE tapering will not start before Q4 2017, and we still expect the ECB to announce that asset purchases will be extended by six months at the same €80bn monthly pace until September [next year]” when the current schedule ends in March.
“We are still a long way off ‘Taper Time’,” agrees today’s credit markets’ update from French bank Natixis, noting that while German and other European government debt prices “underwent a substantial correction” on Tuesday’s report, the futures contract in Bund yields “then rebounded when ECB chief Mario Draghi pointed out that the bank’s monetary policy council had not discussed tapering.”
“As quickly as gold fell, gold could rally back,” reckons economist Barnabas Gan at the Singapore branch of Oversea-Chinese Banking Corp.
“Weak inflationary pressures [capping interest-rate expectations] may once again lift gold prices back to their previous shine.”
Back in Birmingham, England, new UK prime minister May today said that “A change has got to come” to monetary policy “and we are going to deliver it” after the Bank of England’s low rates and QE money creation meant “people with assets have got richer, people without them have suffered; people with mortgages have found their debts cheaper, people with savings have found themselves poorer.”
But “it’s unlikely that any domestic factor, whether monetary policy or anything else, can be the predominant influence on longer-term real interest rates,” said Bank of England deputy-governor for monetary policy Ben Broadbent in a speech at the Wall Street Journal’ss offices in London, “as these are determined globally.
“It’s hard to believe central banks were doing much else than simply following a similar decline in the neutral rate of interest – the level consistent with stable inflation.”
Silver meantime tracked gold prices near 4-month lows as the start of US trading approached Wednesday, extending its Dollar-price drop to 15% from Brexit’s peak of early July to trade below $18 per ounce.