GOLD PRICES slipped in a tight $3 range Thursday morning while commodities edged higher, bond prices slipped and global equities held flat overall as the central bank of the 19-nation Eurozone – the world’s largest single currency bloc – kept its asset purchase and negative interest-rate policies unchanged at its June meeting.
Priced in US Dollars, gold traded at $1214 per ounce as European Central Bank chief Mario Draghi prepared to give his regular press conference.
The European Central Bank faces a final ruling from the constitutional court in Germany, the Eurozone’s largest economy and member-state, regarding the legality of its QE money-creation and bond-buying policy in 3 weeks’ time.
Tokyo’s Nikkei share index today fell over 2% as the Japanese Yen continued to rise on the FX market, potentially denting the country’s export sales, despite record levels of QE plus negative interest rates from the Bank of Japan.
Gold priced in Euros held 0.5% lower for the week at €1085 per ounc e, and slipped back towards Wednesday’s new 4-month lows against the Yen at ¥4,254 per gram.
“Possibility of another leg of down-move near term to the key support of $1190 [in US gold prices],” says a technical analysis from French investment bank and bullion market maker Societe Generale, pointing to last October’s high.
“[A move back] above multi-month channel at $1243 will be needed to resume uptrend.”
“Initial support is offered by $1192,” agrees the latest Bullion Weekly Technicals from Karen Jones at Commerzbank, also pointing to the October 2015 high.
But for the German financial services group’s technical analyst, gold’s “near-term weakness is viewed as corrective only [as] the weekly close above $1201 completed a large falling wedge pattern which offers an upside measured target to $1450 longer term.”
“Heavy speculative positioning in gold and silver [does] pose downside risks to prices,” says Dutch bank ABN Amro analyst Georgette Boele.
Commodity investments held by fund managers worldwide grew to $220 billion in April, a report from UK retail and bullion bank Barclays said Tuesday – up 14% from March to a 1-year high – with precious metals positions and bets accounting for half that total.
Latest data on US derivatives show hedge funds and other speculative traders slashing their bullish bets, net of bearish contracts, by almost 30% in gold futures and options since the 5-year record set a month ago.
The ‘Managed Money’s net speculative position in Comex silver contracts has meantime fallen by almost one-fifth from the new record high set in mid-May. 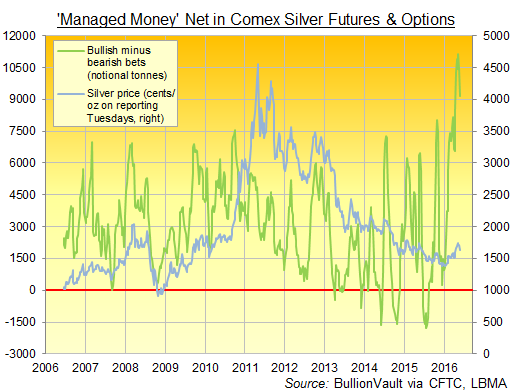 “We don’t think the trend [in precious metals has] changed,” the note from ABN Amro goes on, “as long as prices remain above their 200-day moving averages.”
For gold prices, says ABN’s Boele, the 200-day moving average comes in at $1163 per ounce, and at $15.19 for silver.
Silver prices briefly rallied above $16 per ounce on Thursday from yesterday’s drop to a 7-week low at $15.83 in London trade.
Gold speculators currently losing money on their bullish bets, and so needing to roll their Comex futures and options onto the next calendar contract, “are paying the most in at least half a decade to maintain [their position],” reports Bloomberg, quoting Swiss refiner and finance group MKS’s head of trading Bernard Sin.
“Those holding June futures would have paid an extra $3.40 an ounce on May 23 to swap that position for the most-active August contract,” says the news-wire, citing Comex data.
Physical gold demand, in contrast, saw imports to India – the second-heaviest consumer market – through the key hub of Ahmedabad in Gujarat decline for a fourth month running in May, says the latest data.
Down 93% from the same period a year ago, inflows fell to the lowest monthly total since the government’s “80:20” block on legal imports in 2013 and the lowest May total since the global financial crisis of 2009.
“The market is yet to get over the impact of the 42-day long strike earlier this year,” the Times of India quotes one Ahmedabad jeweler, pointing to the recent protests at a new gold sales tax.
Shanghai gold prices meantime slipped Thursday for the first day in three, edging down 0.2% against the Yuan at China’s afternoon benchmark auction, and cutting their premium over comparable London quotes below $3 per ounce.
Since launching in mid-April, the new Shanghai Gold Price benchmark has shown an average $2 per ounce premium to international ‘spot’ quotes for London delivery, offering importers an incentive to buy and ship metal into the world’s largest gold mining, importing, private consumer and central-bank buying nation