GOLD PRICES traded in a narrow $5 range above last week’s close on Monday morning in London as expectations held firm for a US Fed rate hike next month and the British Pound dropped amid fresh doubts over Prime Minister Theresa May’s leadership, writes Steffen Grosshauser at BullionVault.
Gold prices climbed to $1279 per ounce after posting its biggest daily decline in three weeks in Friday’s session, falling below the 100-day moving average as the US Comex futures and options exchange saw heavy selling concentrated in 10 minutes.
Monday’s bounce in non-yielding bullion prices were limited, however, against a strengthening US Dollar and a further rise in the rate of return offered by US Treasury bonds.
Market expectations now see a 96.7% certainty of a Federal Reserve rate rise to a ceiling of 1.50% at the meeting 1 month from today, up from 82.7% this time in October. 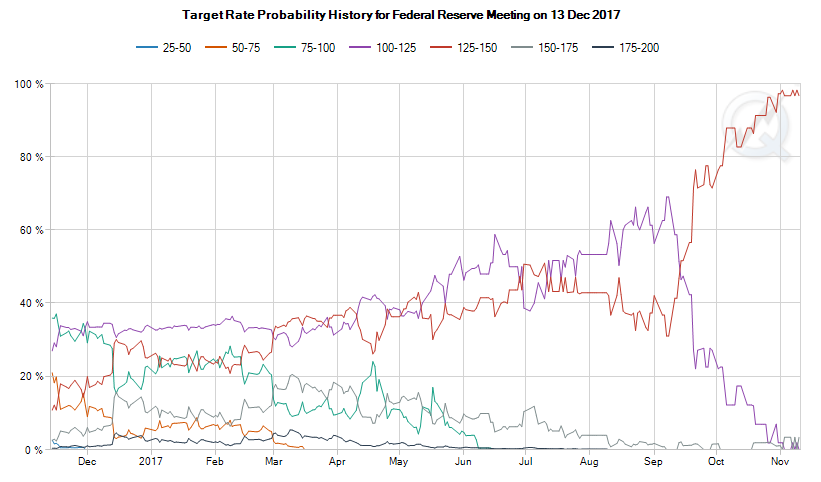 “A higher yield tends to increase the cost to carry gold, and we had a little uptick in the yield curve slope,” says Bart Melek, head of commodity research at Toronto Dominion Bank.
Philadelphia Fed President Patrick Harker meantime said today he expects the US central bank to raise rates at their meeting next month, with a further 3 increases likely next year unless inflation in the cost of living retreats.
US lawmakers said over the weekend that President Trump’s tax-cut proposals face heavy debate and challenges between now and the New Year.
“We don’t see much movement in gold prices in the next one or two months,” reckons Richard Xu, a fund manager at China’s biggest gold exchange-traded fund HuaAn Gold.
“In lieu of major developments, it is difficult to see gold finding the support necessary for a move back toward $1300 over the near-term,” agrees Swiss refiner MKS Pamp’s trader Sam Laughlin.
Gold for UK investors rallied by £10 on Monday, back towards last Wednesday’s 3-week highs at £980 per ounce, as Sterling was battered by nearly 1% on the currency market after The Sunday Times reported that 40 members of Parliament from Prime Minister Theresa May’s Conservative Party have agreed to sign a letter of no-confidence in her ability to push for the Brexit deal she has proposed.
While the Pound’s weakness supported Britain’s FTSE100 Index, the vast majority of Asian and European indices dropped on Monday, with the pan-European STOXX 600 benchmark led down by heavy losses in energy provider EDF.
Brent crude oil stayed near a 2-year high buffeted between further tensions in the Middle East and reports of rising US production.
Silver showed low trading volumes on Monday but stayed above Friday’s close at $16.88. Trading in platinum and palladium also remained subdued throughout the morning with palladium oscillating around the $1000 level through which it slipped last Friday.
Bitcoin, the original crypto-currency, meanwhile slightly recovered after slumping more than 25% in the previous 4 days amid concerns over the cancellation of a software upgrade.