GOLD PRICES edged above last week’s finish at $1200 per ounce Tuesday morning, holding in a tight range yet again as crude oil set fresh 4-year highs and government bond yields ticked up ahead of tomorrow’s interest-rate decision from the US Federal Reserve.
Gold was also little changed for non-Dollar investors, trading at €1020 for Eurozone buyers, as 10-year US Treasury rates rose to 3.10%, just below May’s 7-year peak.
Major world stock markets pushed higher Tuesday morning but emerging Asia held flat and China’s stock market returned from its mid-autumn festival holiday to drop for the 13th time in the last month.
Volatility in gold prices has meantime been lower over the last 22 trading days than all but 11 one-month periods since late 2001 according to BullionVault analysis today.
High to low, gold’s London benchmark prices have moved just 2.1% since 24 August.
The typical 22-day range over the last half-century has been 5.7% according to data from trade body the London Bullion Market Association. 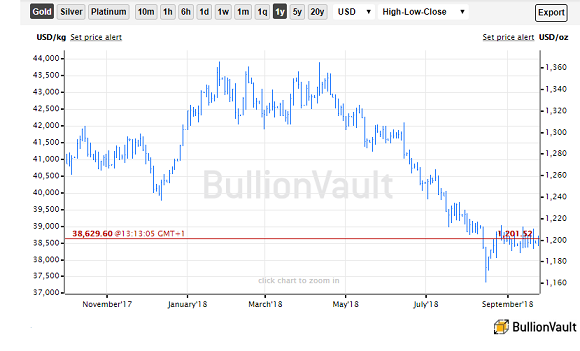 “Comex gold expiry today,” says a trading note from Swiss refining and finance group MKS Pamp, pointing to US gold options contracts.
“Notable size [in betting] around $1200 is likely to keep the metal around [that] figure,” says MKS’s trading team.
Wednesday will bring expiry of September’s Comex gold futures.
Over in the physical market, “The forced sellers have probably been sated,” says Dennis Gartman, author of the eponymous investment letter since 1987, speaking to ETF.com about the recent drop in gold bullion reserves held by the central banks of both Turkey and Venezuela amid this summer’s emerging-markets slump.
For investor, “Gold is [now] a far better buy than a sell – no ifs, ands or buts,” he goes on.
“If you own 5% of your assets in gold, maybe you should raise that to 10%.”
“A year from now,” said Gartman 12 months ago, “gold will be demonstrably higher than it is right now…certainly [at] $1400 in Dollar terms.”
With China and the US meantime imposing the latest round of tit-for-tat trade tariffs on each other’s imports yesterday, “Markets [remain] fairly sanguine about the impact of trade wars,” says Japanese conglomerate Mitsubishi’s strategist Jonathan Butler.
“However this could change if growth concerns reappear, particularly surrounding China, damaging risk assets and potentially supporting safe havens such as gold.”
“We seemingly reside,” agree analysts at Canadian brokerage RBC Capital Markets, “in a trading environment that requires an ‘actuality’ rather than a mere risk to see any material rise in gold prices.
“For gold to rally, the market needs to expect a sizable negative economic fallout – something large enough to offset the effect of a strong Dollar.”