GOLD PRICES held at 10-month highs versus the Dollar on Friday morning in London but traded at only 2-month highs in Euros and Chinese Yuan as the US currency slipped ahead of key monthly jobs data from the world’s largest economy.
Rising back to $1320 per ounce today, the Dollar gold price on Thursday ended August well above the 6-year downtrend starting at its all-time high of $1920 – set when US government debt lost its “risk-free” AAA status amid wrangling over raising Washington’s debt ceiling.
September 29th marks the deadline for Congress to agree a new ceiling above the current $19.8 trillion limit.
“Even before this latest surge in gold prices,” says the latest Precious Metals Weekly from specialist analysts Metals Focus, “sentiment towards gold had already started to slowly improve among institutional investors.”
Hedge funds and other speculators grew their net bullish betting on Comex futures for 5 weeks straight, Metals Focus notes, reaching a post-Trump victory high after setting an 18-month low in mid-July.
“Gold ETP holdings have also recorded healthy inflows over the same period,” the consultancy adds,
The largest such vehicle – the SPDR Gold Trust (NYSEArca:GLD) – expanded at its fastest 3-session pace since February as gold prices broke above $1300 at the start of this week after the annual central-banking conference at Jackson Hole failed to deliver any hint of tighter US, Eurozone or Japanese monetary policy to come and the pariah state of North Korea fired missile tests across Japan.
Now needing 816 tonnes of bullion to back its shares, the GLD had shrunk to a 5-month low at the start of August as investors liquidated the trust fund’s stock.
The gold price has risen almost 6% versus the Dollar since mid-July, when the GLD was last as large as at Thursday night’s close. 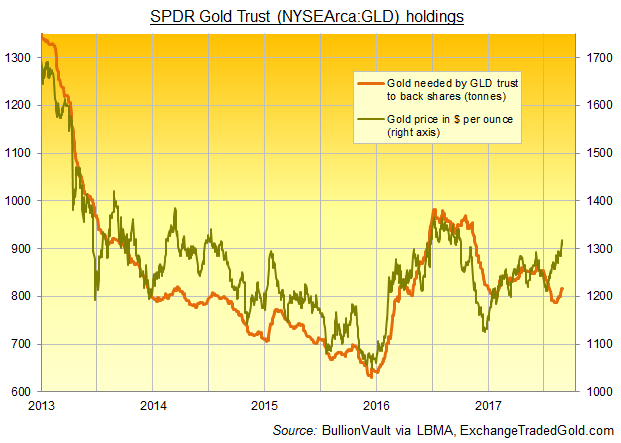 The Dollar meantime eased backed Friday after rallying hard from last week’s new 2-year lows versus the Euro.
The US currency also slipped today to new 15-month lows against the Chinese Yuan, helping trim the Shanghai premium – over and above comparable London quotes – to just $3.80 per ounce.
That was the smallest incentive to new imports into the world’s No.1 gold consumer market since immediately after last October’s National Day Golden Week holidays.
In US Dollar terms, “Gold is evolving within a large inverse Head and Shoulders,” reckons the latest technical analysis of gold prices from French investment bank Societe Generale.
Seeing a neckline at $1350-1356 – and with technical analysis of inverse head and shoulders patterns suggesting a possible $300 rise from there – SocGen’s team says that level “will be a crucial hurdle”. 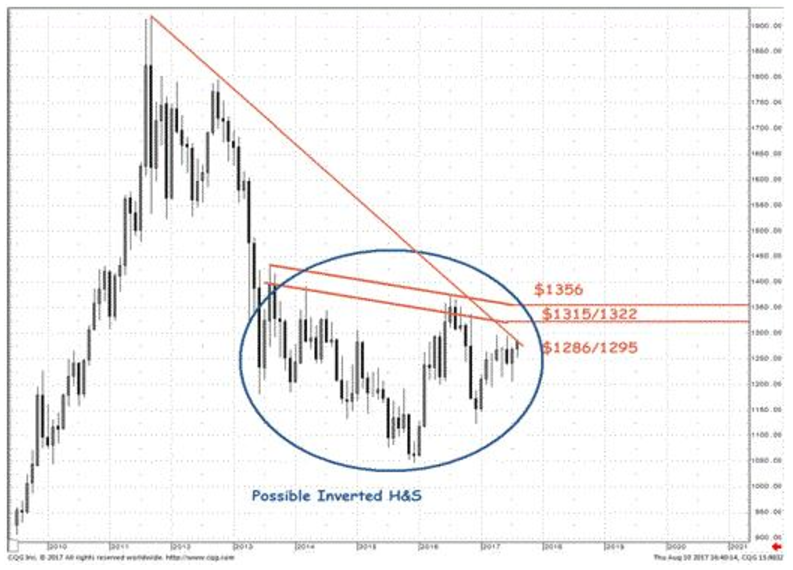 Despite Pyongyang’s continued threats and Hurricane Harvey’s damage to Texan oil facilities, Tokyo’s Topix index rose Friday to begin September 1.3% below late August’s 2-year high while US crude oil prices slipped further from August’s 5% drop.
US president Donald Trump may today link this month’s looming deadline for Congress to either raise Washington’s legal debt ceiling or risk suspending federal government spending with aid for the Houston region after Hurricane Harvey sparked flooding last week, killing 39 and damaging some 100,000 homes.
Treasury Secretary Mnuchin said overnight that September 29th’s debt ceiling deadline may have to come forwards following the disaster, with Texan authorities putting the aid needed at $125 billion.
Political argument around the debt ceiling is likely to center on Trump’s request for funds to build his “great wall” along the border with Mexico, contracts for which are now being issued.
“The US political backdrop is likely to remain turbulent,” says Metals Focus, “[making] major policy change hard to implement. This in turn should cast doubts on the US economy’s ability to outperform expectations.”