GOLD PRICES again dipped and rallied back above $1250 per ounce in Asian and early London trade Thursday, unchanged from the end of last week with analysts continuing to point to the metal’s 200-day moving average at $1260 as strong resistance to the first quarter’s 8.6% gain.
Asian stock markets closed lower but European shares held flat overall.
The British Pound meantime held sharply below this week’s near 8-week highs on the FX market after German Chancellor Angela Merkel rejected the central proposal in UK Prime Minister Theresa May’s formal Brexit letter – handed to the European Council yesterday – for negotiations on both the UK leaving and its then-relationship with the European Union to start now and run together.
While the giant GLD gold ETF ended Wednesday unchanged in size, the SLV silver trust shrank 0.8% as shareholders liquidated stock, forcing an 85-tonne outflow – equal to more than  1 days’ global silver mine output – and taking the fund’s bullion holdings back to mid-March’s 12-month lows at 10,291 tonnes.
Trading at $18.16 per ounce, silver prices held a 2.1% gain for the week so far Thursday morning in London.
“Resistance remains firm at $1259.40 – the 200 day Moving Average,” says the daily technical analysis of gold prices from bullion clearing and market-making bank Scotia Mocatta’s New York office.
“Spot gold has retested the 200-day ma,” agrees German bank Commerzbank’s weekly technical book.
Now acting as resistance, “This guards $1295.50, the 5-year downtrend,” it says. 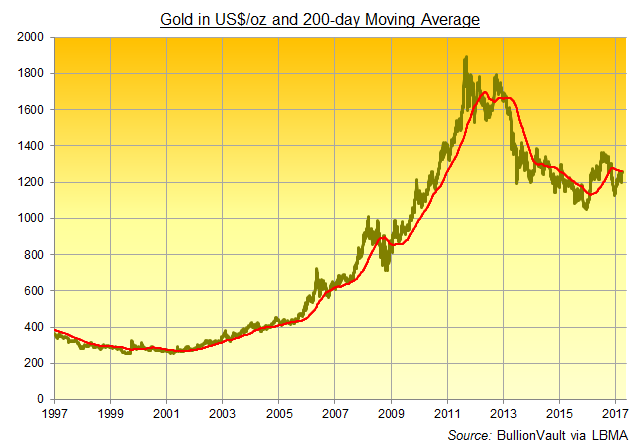 Chinese gold prices neared the end of March unchanged for the month in Yuan terms on Thursday,  also fixing in Shanghai at a $12 per ounce premium to comparable London quotes – a strong incentive to new imports into the world’s No.1 gold consumer nation.
Also the No.1 mining nation since 2007, China may have identified what Shandong Gold (SHA:600547) – the country’s 3rd largest gold producer – calls a “world-class deposit” in the far eastern Jiaodong Peninsula, with 358 tonnes of reserves.
Should the deposit’s likely resources also get tapped, the site could produce gold for 40 years at full capacity Shandong says.
The heaviest official buyer of gold so far this century, the People’s Bank of China will meantime raise its key interest rate twice in 2017 according to a survey of fixed-income analysts by Bloomberg.
The city of Beijing has introduced nine policies in just 10 days “aimed at curbing skyrocketing home prices,” reports the People’s Daily online, including a ban on turning commercial property into residential units and a rule that potential home-buyers must have paid tax locally for 60 consecutive months.
“China is far from the end of efforts to squeeze out bubbles,” reckons ANZ Bank economist David Qu in Shanghai, “[but] the PBOC will to some extent follow the Federal Reserve in tightening to keep the rate gap largely steady.”
After renowned Fed ‘dove’ Charles Evans this week said two further rate rises look warranted, a view backed separately by vice-chair Stanley Fischer, non-voting Boston Fed president Eric Rosengren called Wednesday for a total of four hikes in 2017 – the initial Fed forecast from December’s meeting, since downgraded in their March forecasts.
But “while the economy overall is recovering and the job market has improved substantially,” said Fed chair Janet Yellen in a speech yesterday, “pockets of persistently high unemployment, as well as other challenges, remain.”